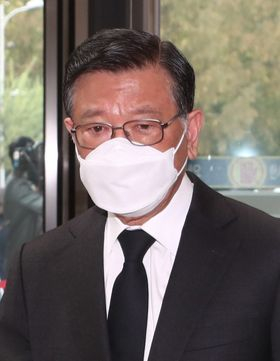 Former chairman of Kumho Asiana Group Park Nam-koo was grilled by prosecutors Thursday over accusations of antitrust violations in the conglomerate during his tenure.

Park presented himself for questioning at the Seoul Central District Prosecutors’ Office at 9 a.m.

Park resigned in 2019 as chairman of Kumho Asiana Group, which once owned Asiana Airlines and Kumho Tire, as controversy mounted over the inter-affiliate deals.

Chaebol have long faced scrutiny for showing favor to their affiliates, including pressuring suppliers to deal with their subsidiaries, discounting rates for transactions within conglomerates and showing favoritism for their own subsidiaries in lucrative contract bidding processes.

In the case of Kumho, former chairman Park is suspected of manipulating financial deals within the conglomerate, as well as with its business partners, to arrange profitable loans for Kumho Buslines below the nominal interest rate. He and his family are also accused of benefitting off of the transactions within the conglomerate.

According to the FTC, senior management at Kumho Asiana Group decided to restructure the conglomerate after the 2008-09 financial crisis by salvaging Kumho Buslines, in which the group had a high shareholder stake.

In order to raise funds to buy an outright majority stake in the transport company, it signed a contract in 2016 with Swiss company Gategroup to provide in-flight catering for Asiana.

The commission alleges that in return for the catering contract, Gategroup was compelled to take out 160 billion won ($143 million) in bonds with warrants issued by Kumho’s struggling bus and freight transport affiliate which had a zero rate of interest.

The FTC determined that the Kumho bus company earned 16.2 billion won in profits from the interest gap.

The commission also alleges that as this transaction faced delays, nine Kumho affiliates, including Asiana Airlines and Kumho Industrial, loaned a total of 130.6 billion won in 45 installments between August 2016 and April 2017 to Kumho Buslines at an interest rate of 1.5 to 4.5 percent, lower than the nominal interest rate of 3.49 to 5.75 percent.

The deals within Kumho occurred before Asiana Airlines was put up for sale in April 2019 as the airline’s business foundered.

The FTC contended that Kumho Buslines earned about 16.9 billion won in total from the interest rate gaps, and that Park and his family gained at least 7.7 billion won in profits and 250 million won in dividends. It also concluded that the conglomerate’s affiliates unfairly supported the transport company to help cement Park’s control over the group.

After imposing a 32-billion-won fine on the group for the antitrust violations, the commission referred Park and two senior Kumho executives to the state prosecution service for criminal investigation.

Prosecutors raided Kumho Group’s headquarters in Seoul last November and arrested a former group executive and a FTC official for allegedly conspiring to delete documents which might incriminate the conglomerate for its internal dealings. The commission official is accused of accepting bribes to help destroy evidence which would be unfavorable to the company.

The state prosecution service will decide whether to apply for an arrest warrant for Park after it finishes questioning him and other suspects.

In response to the accusations, Kumho Group said that all transactions, including the catering contract and those involving group affiliates, were conducted normally and did not come about as a result of orders from senior members of the group.