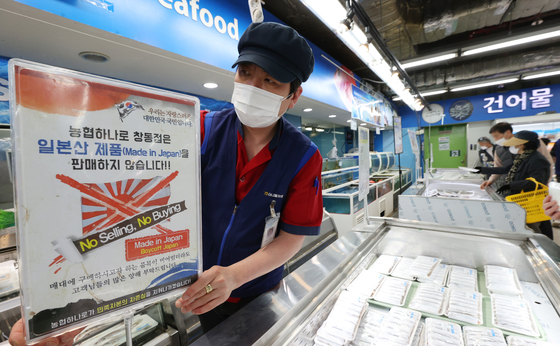 The seafood section of a retail store in Seoul with signs that read “no selling, no buying” of Japanese seafood on Tuesday. [YONHAP]


Consumers are expressing concern about the safety of seafood following Japan’s recent announcement of plans to release contaminated Fukushima reactor water into the sea.

In response, discount marts are actively marketing their lack of Japanese seafood and urging the government to respond to the Japan’s decision.

Homeplus said the seafood sold at its stores is caught far from Japan.

“We sell seafood imported from Norway or the United States,” said Lee Sung-soo, a spokesperson for Homeplus. Because of this, Homeplus does not conduct radioactivity test on the seafood it sells, he added.

Some seafood sellers at Nonghyup displayed “not Made in Japan” signs.

Japan on Tuesday announced it will release more than 1 million tons of contaminated water from the Fukushima nuclear plant into the sea starting in two years.

The Korean government has banned the import of seafood from several Japanese prefectures.

Seafood imported from Japan has to undergo radioactivity tests.

The government has acquired more equipment needed for testing, and also raised the inspection time from the previous 1,800 seconds to 10,000 seconds with the goal of increasing accuracy.

A group of associations demanded that Japan halt the release, calling it “a destructive act that isn’t different from a nuclear attack on Korean citizens and humankind worldwide.” They vowed to “entirely ban the import of Japanese seafood until the decision is withdrawn.”

Consumers have joined in.

Protests are particularly strong in Ulju in the southeastern city Ulsan, which is geographically close to Japan.

Lee Seon-ho, a mayor of Ulju County, said the county “will boycott Japanese products and won’t cooperate with Japan in any way if Japan doesn’t withdraw its decision.”