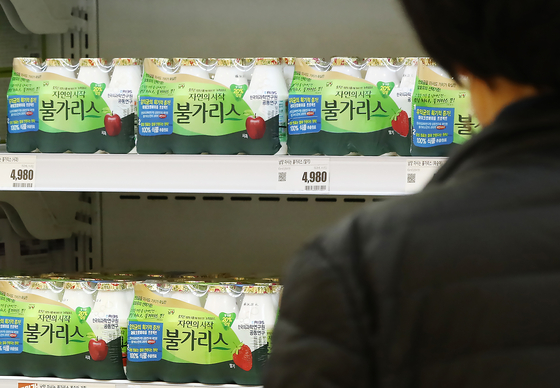 Bulgaris, a dairy drink from Namyang Dairy Products, displayed at a discount mart in Seoul on Wednesday. [YONHAP]

Call it the Bulgaris bounce.

After a report surfaced that the yogurt drink protects against Covid-19, the stock of Namyang Dairy Products, the manufacturer, jumped by a third, only to fall back to where it started within a few days as doubts were expressed about the claim.

The dramatic run started on Tuesday and was over by early Thursday.

While the Korea Exchange is monitoring the stock, a ministry is looking into the bold assertion made by the company and a regulator is pouring cold water on the Covid-busting powers of the humble yogurt drink, Namyang is sticking to its guns, and those little plastic bottles of Bulgaris are flying off the shelves.

Rationing has been reported.

On Tuesday, Park Jong-su, head of Namyang's internal research institute, said that Bulgaris reduces the chance of a Covid-19 infection by 77.8 percent. The researcher also said that the drink helped remove 99.999 percent of Influenza A (H1N1) virus present.

The claims about the lactobacillus drink were made Tuesday at the Anti-virus Food Development Symposium in the Corona Era, which was hosted by Korea Research Institute of Biomedical Science.

Powers that be are not at all happy about Park's comments.

The Ministry of Drug and Safety on Thursday said that it is looking into Namyang's possible violation of advertising laws, saying the company promoted the symposium where the Bulgaris claims were made.

Retail investors bought more than 6-billion-won ($5.36 million) worth of the company's shares over the past couple of days, and some are wondering whether company executives traded on the bounce using insider information.

"We are currently monitoring the fluctuations of Namyang," said a spokesperson for the Korea Exchange. "But that's not unusual, as we monitor other companies showing fluctuations in stock prices."

In response to Namyang's claims, the Korea Disease Control and Prevention Agency said: "To confirm the effectiveness of a certain food product in preventing Covid-19, a study involving people is needed."

Namyang, which has been making the drink since 1991, is defending itself and telling the critics to read the statement by Park for what it is.

"There has rarely been research on finished food products, and we announced at the symposium that we have discovered a new value and found it meaningful," said a spokesperson for Namyang. "Animal testing and clinical trials are necessary, but the achievements are sufficient at this point."

Scientific evidence suggests that Namyang may be on the right track. Researchers at Ben-Gurion University of the Negev have found that probiotic yogurt may be effective in the treatment of Covid-19 infections, according to a report in the Jerusalem Post, though they say that its is the effect on inflammation, especially the cytokine storms, that makes the difference.

Sales of Bulgaris at retailers have jumped.

Emart reports a doubling of Bulgaris throughput Tuesday and Wednesday, while Bulgaris sales at Lotte Mart jumped more than 65 percent on year on Wednesday.

"People usually buy one or two at a convenience store," said a spokesperson for CU. "But since Tuesday, more people started buying a whole box."

Some supermarkets limited the quantity of Bulgaris drink per customer.