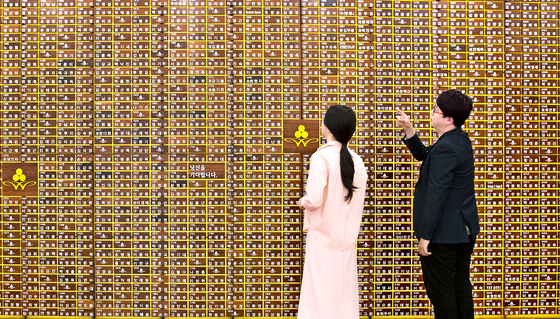 The names of donors fill the wall at the headquarters of the Community Chest of Korea in Jung District, central Seoul. [LIM HYUN-DONG]


Touched by unprecedented reports of suffering during the global Covid-19 pandemic, donations from Koreans to charitable causes have surged in the past year. 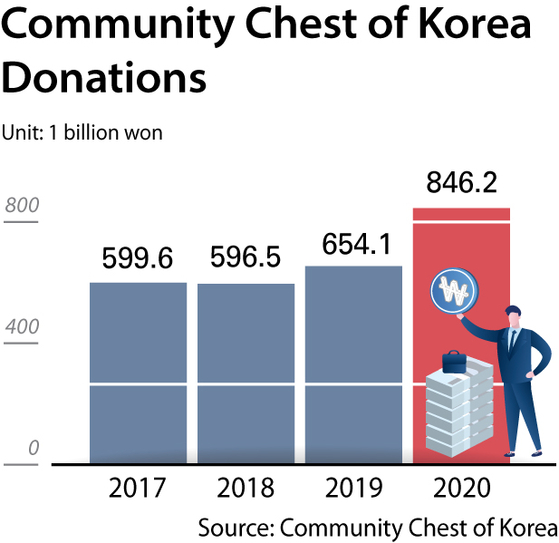 The Community Chest of Korea, Korea's largest welfare organization, reported a 29 percent increase in total donations after the pandemic began, with bequests rising from 654 billion won ($587 million) in 2019 to 842 billion won in 2020.

The organization also reported that the number of individuals whose donations exceeded 100 million won, dubbed Honors Society members, grew by 256 people, representing an 11 percent increase after a declining trend.

Good Neighbors International, a Korean emergency care and food relief nongovernmental organization, also reported a nearly threefold increase in the number of donors whose bequests exceeded 10 million won, with 47 people surpassing that amount in 2020 compared to 18 in 2019.

Concerning the marked increase in charitable giving during the last year, Yang Yong-hee, a professor of social care at Seoul Theological University, remarked, "It was like this during the 1997 Asian financial crisis. As the wealth and income gap has increased during Covid-19, benefactors who feel socially responsible have stepped out to help."

Yang Ho-yeong, chief of marketing at Good Neighbors, has a slightly different take.

“In the past, leaders of chaebol donated out of a sense of inherited moral responsibility, or noblesse oblige, but nowadays self-made individuals give away a significant portion of their assets and wealth to society,” Yang said.

“In essence, the paradigm of our donation culture has changed.”

Some donors, including Honors Society members of the Community Chest, have also remarked on their sense of social responsibility.

“Having struggled as a student and received help with university tuition fees, I resolved to give back what I had received if I succeeded,” said 41-year-old Kim Jun-yong, CEO of entrepreneurship consulting company My Franchise and also a member of the Honors Society.

Jeon Jong-ha, 31, president of health and beauty company PurpleLabs, expressed similar sentiments. After selling his company for 30 billion won, Jeon said he came to question the meaning of money.

“After seeing I had 20 billion won printed in my account book, I realized that a life of chasing money was not very meaningful. That led me to care more about giving and sharing,” Jeon said.

“I consider a donation akin to a tax on the benefits I have received from public goods.”