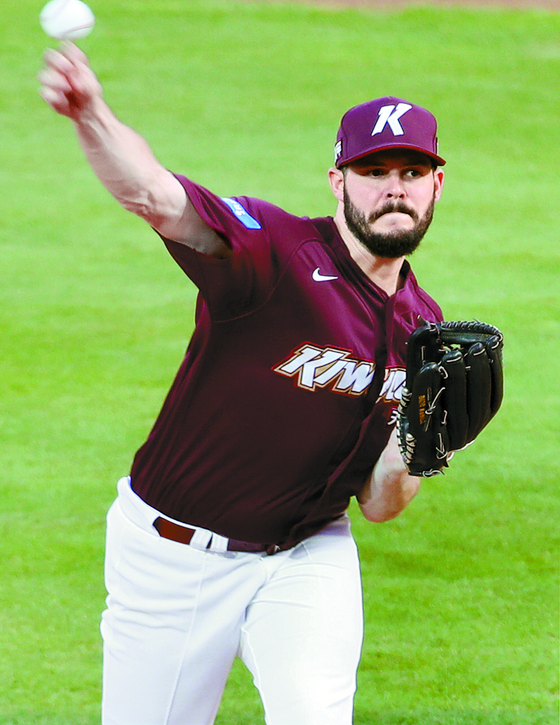 
The Kiwoom Heroes have reacquired pitcher Jake Brigham on a one-season deal worth a maximum $530,000, the club announced Thursday.

The Heroes signed Brigham, who formerly played for the west Seoul club from 2017 to 2020, on an annual salary of $480,000 with $50,000 in incentives. The club released new pitcher Josh Smith after just two weeks in the KBO to make room for Brigham.

Brigham originally signed with the Heroes in 2017, picking up 10 wins and six losses with a 4.38 ERA in his first year. The former Detroit Tiger stayed in Seoul for another three years, with his ERA below 4.00 every year after that first season. In 2019, his best year in the KBO, Brigham picked up 13 wins with five losses and an ERA of 2.96.

After four years with the Heroes, the club announced at the end of last year that they had parted ways with the American right-hander. Brigham signed with the Wei Chuan Dragons of Taiwan's Chinese Professional Baseball League for the 2021 season, making his debut with the new club on March 19 this year.

In five starts with the Dragons, Brigham picked up three wins and one loss with a 0.63 ERA over 28 and two third innings.

Smith joined the Heroes this year on a one-year contract at a maximum $600,000. He ends his brief KBO career with one win and a 6.30 ERA with 10 innings pitched.

The Heroes have had scouts following Brigham's career in the CPBL, monitoring how well he had overcome a latent injury that affected his performance last year. The club said they chose to bring Brigham back to Korea because they need a more competitive foreign pitcher.

Brigham will play out the rest of this month with the Dragons before flying back to Korea at the start of May. He will then have to complete two weeks of mandatory quarantine before rejoining his old club.

As of press time Thursday, the Heroes are tied for fourth in the KBO with five wins and five losses.