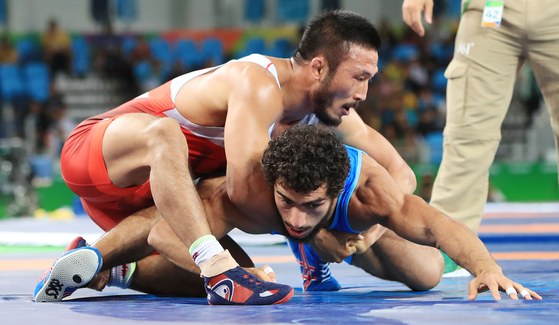 Korean Greco-Roman wrestler Ryu Han-su, left, takes on Mihran Harutyunyan of Armenia in the quarterfinals for the Men's Greco-Roman 66-kilogram event at the Rio Olympics in 2016. [JOINT PRESS CORPS]


Korea will be competing in at least two wrestling events at the delayed 2020 Tokyo Olympics.


Of the three phases of Olympic wrestling qualifiers, the Almaty tournament was the second. That means Korea still has one more chance to earn more spots at the Olympics.


The first phase was the 2019 World Wrestling Championships held in Nur-Sultan, Kazakhstan from Sept. 14 to 22, 2019, where Team Korea was unable to win any medals.

In the second phase, two berths are allocated to the winner and the runner-up of in each of the six weight classes across three events — men’s freestyle, men’s Greco-Roman and women’s freestyle.

Two Koreans, Ryu Han-su and Kim Min-seok, were able to advance to the finals, bringing home two Olympic berths for the Greco-Roman 67- and 130-kilogram weight categories. Those spots go to Korea, not to the specific wrestlers.

Ryu advanced to the semifinals by beating Turkmenistan's Azatjan Acilow 9-0 in the quarterfinals.

In the semifinals, Ryu defeated Aram Vardanyan of Uzbekistan, the men's Greco-Roman 72 kilogram silver medalist at the 2019 World Championships 8-0 in the first round, earning an Olympic berth.

Super heavyweight Kim was able to earn a berth after defeating India’s Naveen Kumar 7-1 in the semifinals, but had to withdraw from the final due to an injury.

London 2012 gold medalist Kim Hyeon-woo was eliminated in his first match after losing 1-12 to India's Gurpreet Singh in the quarterfinals.

Chung Han-jae, Kim Jin-hyeok and Lee Se-yeol all won bronze medals in the men's Greco-Roman 60-kilogram, 87-kilogram and 97-kilogram classes, narrowly missing out on a shot at the Olympics.

None of the women’s wrestling national squad were able to advance to the final.

In the women's 53 kilogram freestyle, Kim Hyung-joo failed to advance to the finals in a 1-11 technical fall against Kazakhstan's Tatyana Amanzhol and chose to withdraw from the bronze medal match.

The 57 kilogram freestyle wrestler Um Ji-eun and the 68 kilogram Park Hyeon-yeong also lost in the semifinals in a technical fall — 0-11 against Mongolian Boldsaikhany Khongorzul and 2-12 against Zhou Feng, respectively.

A technical fall is when a wrestler leads by eight points in Greco-Roman or 10 points in freestyle wrestling.

With two tickets to Tokyo secure, Korean wrestlers who haven’t qualified in the first and second phase still have one final chance in May.

The third and final phase of qualifications will be held in Sofia, Bulgaria from May 6 to 9. Two berths will be available in each of the eighteen events.

In the past, wrestling was an event where Korea could expect to see some silverware.

Korea's first Olympic gold medal in wrestling was won by Yang Jung-mo in the 62 kilogram freestyle event at the 1976 Montreal Olympics.

After that, Korea had a streak of six Olympic gold medals in a row from the 1984 Los Angeles Olympics. It is the event in which Korea has won the fourth-most gold medals and the second-most medals of any color.

But those glory days have slowly disappeared at recent Games. Korea won a single bronze medal at the 2008 Beijing Olympics, a gold at the 2012 London Games and a bronze at the 2016 Rio Olympics.

This year, the Korean wrestling star may have fallen even further, with potentially just two wrestlers qualifying for the Olympics. The rest of Team Korea will have just one more shot at regaining their former glory — the final qualifiers in Sophia from May 6 to 9.