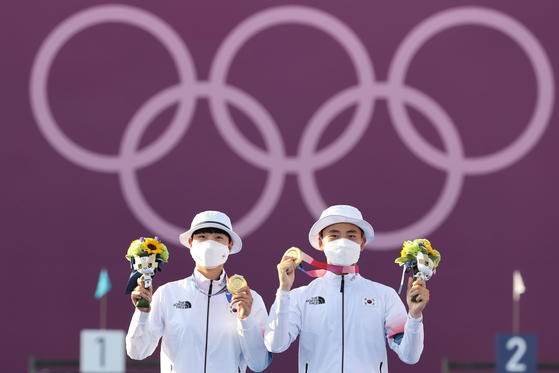 An San, left, and Kim Je-deok hold up their archery mixed team gold medals on the podium on Saturday at Yumenoshima Park Archery Field in Tokyo. [NEWS1]


A difficult Day 1 of the 2020 Tokyo Olympics left Korea with three medals — one gold and two bronze — a solid start, but not quite the explosive beginning the team was hoping for.

Kim Je-deok and An San won Korea's first medal at the Games, taking home gold in the inaugural mixed team archery event on Saturday. Fencer Kim Jung-hwan came next with a bronze medal in men's individual sabre, with Taekwondo practitioner Jang Jun following with bronze in the men's 58 kilogram.

Yet despite the three medals, Korea had hoped for more.

Shooting silverware was noticeably absent. Multi-Olympian Jin Jong-oh failed to make it past the qualification stage in the men's 10-meter air pistol, taking away what was thought to be one of Korea's guaranteed gold medal. Kim Mo-se did make it through, but finished last in the final round. The women's 10-meter air rifle ended in similar fashion.

The Taekwondo results were also disappointing. Jang took home bronze, a nice consolation prize, but the world No. 1 had been a frontrunner for gold in the tournament. Sim Jae-young made it to the quarterfinals of the women's 49 kilogram tournament, but lost to Miyu Yamada of Japan.

Kim Jung-hwan's fencing bronze makes him the first Korean fencer to medal at three consecutive Olympics, but the failure of world No. 1 Oh Sang-uk to make it past the quarterfinals came as a surprise.

Judo was the only other event contested on Saturday, when Korea had hoped to make a few upsets and steal a podium finish or two. Unfortunately that wasn't to be, with Kim Won-jin's quarterfinal finish in the men's 60 kilogram the closest that anybody got to the final three.

Of Korea's powerhouse sports, so far archery has been the only one to live up to expectations. While the surprise failures in shooting and Taekwondo come as a shock, there's still plenty of tournament left for athletes in those sports to redeem themselves. Even if Korea's stranglehold on those core sports is starting to slip, there are hundreds of athletes still to compete in a wide range of sports where Team Korea still has plenty of chance to shine.