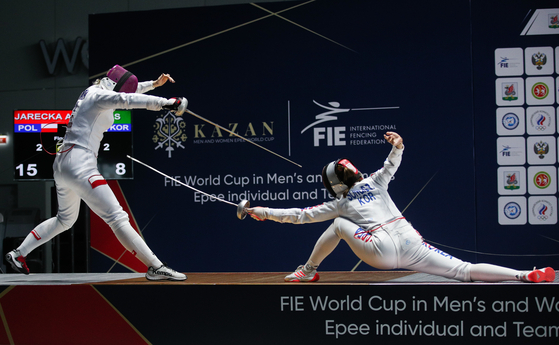 
Korea is off to a good start in the quest for gold at the Tokyo Olympics.

The International Olympic Committee has expanded the field of fencing events for the Tokyo Games, increasing the number of gold medals available from 10 to 12. As fencing is one of the sports that Korea tends to do well in, the expanded field opens the door to more medal opportunities.


Fencing is divided into 12 events based on the weapon used and the style of competition.

Team Korea will compete in 10 of the 12 events, sitting out only the team foil bouts. The Tokyo Games will mark the first time Korea has competed in four team events, having only qualified for three in the past.

The four highest-ranked teams in the world, irrespective of where they are from, qualify for the team events. In addition, among the teams ranked from fifth to 16th, the highest-ranked team from each of four zones — Africa, America, Asia-Oceania and Europe — qualifies for the Olympics, creating a field of eight teams.

The official rank cut off was on Monday and Team Korea qualified for four team events out of the six in total.

The men’s épée team, at fifth, also earned a berth as the highest-ranked additional team from the Asia-Oceania zone.

At the following World Cup event in Kazan, Russia, Choi In-jeong took gold in the women’s épée against Aliya Luty of France, with Kang Young-mi winning bronze in the same event.

As for team events, the women’s épée team — Choi In-jeong, Kang Young-mi, Song Se-ra and Lee Hye-in — were able to bring home silver after defeating strong Italian and Chinese teams, but losing 24-45 to Poland at the Kazan World Cup.

Team Korea will compete in all six individual fencing events at Tokyo.

Korea takes four fencers to Tokyo for each team event — three primary team members and one alternate — with the three primary members automatically qualifying for the individual events.

Outside of the Olympic spotlight, things are also looking good for the future of Korean fencing at the Cairo Junior Fencing World Championships.

Rising star Jeon Ha-young won the women's junior sabre title on Saturday, before going on to take gold in the team event on Tuesday.

“It feels like a dream, even though it was hard for me when I got to 14 points at the end of the final,” Jeon said after winning the individual event.

Jeon and her team's success marks the first time that Korea has taken gold in both individual and team events at a junior world championship.