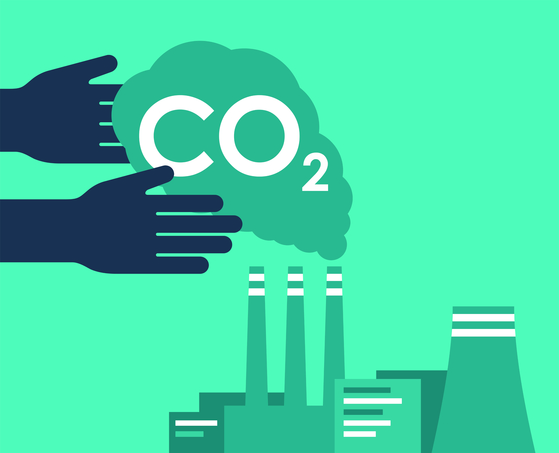 Korea’s transition to a carbon neutral society will be tough for many. But no industries face more of a challenge than steel, petrochemicals and oil refining, where greenhouse gas emissions are intrinsically linked to the ways of production.

In other words, there’s a plan. But the question is feasibility. Replacing production equipment will take massive investments. Technologies to reduce emissions or produce hydrogen in great quantities are still under development or far too expensive for immediate application at industrial sites.

Experts say it’s time to sit down and have a serious talk about the costs we have to pay as Korea’s manufacturing industry goes through a difficult transition to carbon neutrality.

“Carbon neutrality is a global trend. It’s no question that we have to go in that direction,” said Lim Jae-kyu, a senior researcher at Korea Energy Economics Institute (KEEI). “But in terms of pace, we need a clear assessment of where we stand and how much we could do realistically. What we need is milestones. Setting the goal at zero for everybody will only spur unrealistic plans and eventually pull down credibility in government policies.”

The reason steel, petrochemical and oil companies produce massive amounts of carbon dioxide is because of the way its products are made. They all involve combustion of fossil fuels like coal and naphtha.

Without it, manufacturing would be impossible. That’s why companies will need facility upgrades of a fundamental nature -- upgrades that root out the old equipment and replace with new technology.

In the short term, steelmakers have pledged to increase energy efficiency and reuse materials. In the long-term, a coal alternative steelmakers are eyeing is hydrogen. 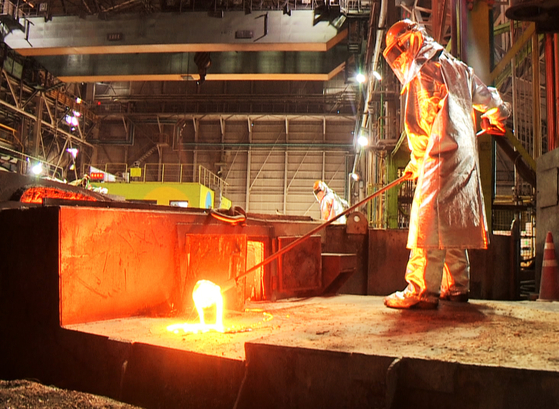 A Posco employee working in a steel mill in Pohang [YONHAP]

The traditional method of producing steel is burning ironstone with coal in high heat at above 1,500 degrees Celsius. In this process, 2 tons of carbon dioxide is produced for every 1 ton of steel. Burning hydrogen, on the other hand, produces water as a by-product instead of carbon dioxide.

But hydrogen-based steelmaking is years away from mass production as the technology is still in its infancy, globally. In Korea, the government is co-developing the technology with local steelmakers Posco and Hyundai Steel with a goal of running tests in production sites in 2025.

Carbon capture, utilization and storage (CCUS) is technology that could benefit all industries that rely on fossil fuel. It starts by extracting carbon dioxide from the gas produced from combusting fossil fuel. The carbon is then liquefied and transferred to a storage deep underground or undersea where it can’t harm the environment.

Unlike hydrogen-based steelmaking, the technology for CCUS is already mature and is at use in many places around the world. including the United States, Europe, China and Japan.

Korea's issue with CCUS is not the technology, says Yoon Yeo-il, a researcher at the Korea Institute of Energy Research. It’s the lack of storage.

“The full chain of CCUS technology--from extracting, liquefying, transporting and storing carbon-- can be put to use immediately,” he said. “The problem is there’s nowhere to store the liquefied carbon dioxide. Unlike the United States or China, Korea has very small territory. Building a carbon storage facility could easily trigger 'not in my backyard protests' from residents in any region.”

That leaves no choice but to drill the seabed. But that would cost around one billion won per hole, Yeo said.

Korea already has failed attempts of building CCUS storage facilities in the country. In 2016, two CO2 storage facilities on a test run-- one on the ground and one offshore in Pohang--were shut after an earthquake. Operations never resumed as a study released soon after suggested the CCUS facilities could have caused the earthquake.


Hydrogen production is a silver lining

As such, it’s no question that the global drive for zero carbon puts a great deal of pressure on steel, chemical and oil companies. But ironically, the increasing demand for ecofriendly fuel also creates a new opportunity in an era where combustibles will have to be replaced.

These industries have an advantage when it comes to producing hydrogen which is created as a natural by-product in their manufacturing. Hydrogen can also be made by processing natural gas, which is another resource steel and oil companies have more access to than other industries.

Previously, steel makers, oil refiners and petrochemical companies re-used most of the byproduct hydrogen art the manufacturing sites. As demand is sure to go up, local companies have released ambitious plans to sell hydrogen. 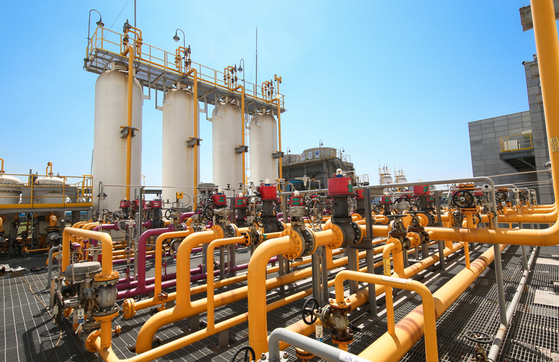 Posco has annual capacity to produce 7,000 tons of hydrogen per year. In February, the company announced it would establish a manufacturing system to produce 5 million tons a year and generate 30 trillion won from hydrogen businesses alone by 2050. Hyundai Steel has a hydrogen factory in Daesan which can produce up to 3,500 tons of hydrogen per year. The company's chief executive said in October that Hyundai may invest up to 250 billion won to enlarge capacity, without suggesting a definite time line.

SK Inc., the largest shareholder of SK Innovation, announced in March plans to build a hydrogen factory with annual capacity of 30,000 tons in 2023. The oil refining subsidiary will supply the byproduct hydrogen created in its Incheon plant. SK E&S will also produce hydrogen from imported liquefied natural gas, which would bring SK’s total hydrogen production capacity to 280,000 tons a year by 2025.

But whether it’s using byproduct hydrogen or processing natural gas, achieving hydrogen that can be commercialized for charging stations and fuel vehicles requires additional equipment. That will take years of investment and construction before fruition.

“There are limits to the amount of byproduct hydrogen that can be produced with current facilities, which means if we want more, we need to expand oil refining facilities,” said an SK Innovation spokesman. “The factories at the moment are not focused on producing hydrogen but oil, so there will need to be additional investments for that shifted focus.”

Researcher Yoon Wang-rae of the Korea Institute of Energy Research agrees that the amount of hydrogen produced at industrial sites like oil refiners and steel mills can be substantial. Technology has also reached a point where mass production is possible as well. But hydrogen supply lacks cost-effectiveness, says Yoon, mainly due to transportation costs.

“Transporting hydrogen through pipelines is cheap but prices jump the minute they’re loaded on tube trailers,” he said. “The most feasible way at the moment is selling hydrogen on-site to regions nearby production facilities.”

Hydrogen has to be liquefied for transportation. But this is an expensive task as hydrogen as a liquid is a volatile substance that requires storage at extremely low temperature of minus 253 degrees Celsius and high pressure. If the conditions are not met, storage tanks could explode.

Moreover, it would take a much longer time for hydrogen produced by manufacturing companies to be completely green. Hydrogen produced at the moment is gray or brown hydrogen, meaning it comes from burning combustible fuel. To produce “green hydrogen,” the energy will have to be electricity generated from natural resources like solar or wind power, which at the moment is still very expensive.


Haste will do harm

In short, technologies suggested by companies and the government are still at the very early stages. They have not reached the point to be applied in the manufacturing field, lack feasibility and will take years of investment in technology and production equipment.

Some experts raise doubt on the government’s 2050 due date for carbon neutrality. According to a carbon reduction plan submitted to the United Nations in December, Korea aims to reduce carbon emissions by 24.4 percent in 2030, compared to 2017, and reach the point of carbon neutrality by 2050.

But forcing a uniform standard may be an impractical initiative that doesn't consider the respective circumstance each industry is facing--which for steel, petrochemical and oil refinery is a little more desperate than others.

“This isn’t something that can be done by the private sector alone,” says Jung Eun-mi, a senior researcher at the Korea Institute for Industrial Economics & Trade. “As a whole, we’ll need infrastructure to use more electricity as we burn less fossil fuel. There will have to be a consumer market is are willing to pay more for products that emit less carbon.”

Jung adds that these industries will likely lose competitiveness in the global market if they are not offered the right incentives, while the government carries out plans for carbon neutrality.

In Europe where efforts to pull down carbon emissions started long before Korea, governments have offered support for industries that are vulnerable to the transition for zero carbon. Steelmakers, for example, were offered discounts in electricity fees.

Another reason Korea should be careful in setting an execution plan is because steel, oil and petrochemicals take up a significant portion of Korea’s exports and are fields whose rise and fall could affect other industries as well, like automaking and shipbuilding.

Steel, oil and petrochemicals were among Korea’s top five export categories last year. According to government data, four energy-intensive industries including cement took up 8.4 percent of Korea’s 2019 gross domestic product. This was much higher than the 5.6 percent in the United States, Japan’s 5.8 percent and the European Union’s 5 percent.

“These industries are sure to be affected as the society shifts towards carbon neutrality and their fall will affect our country as a whole,” Lim Jae-kyu, a senior researcher at KEEI.

“Some say ‘green industries will make up for that loss and create new jobs. But nobody knows what this 'green industry' will be like. It has no substance.”

According to Lim, who advises to government officials on energy policy, discussions have just started to set action plans for carbon neutrality. Now that there’s a goal, what they need is a serious calculation on the costs that will have to be paid.

“Even if the technology is ready, the costs will be immense to apply them to manufacturing sites, and nobody is willing to say how much this costs and who will take on that financial burden,” he said. “Companies are announcing investment volumes, but there will be hidden costs that nobody knows yet.

“The cost issue is something that hasn’t been addressed yet but we'll get there at one point. The investments will be impossible to be handled by a single party. We also need to deliberate how those costs will affect our economy as a whole.”