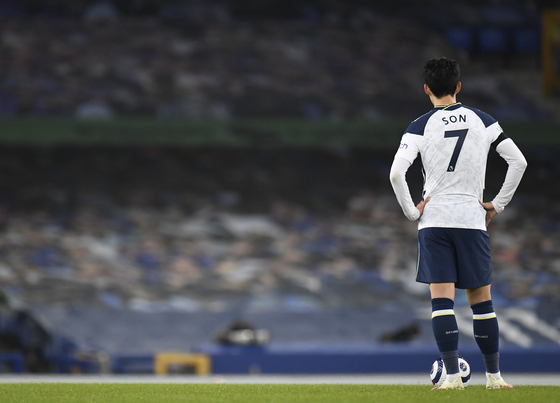 
Son Heung-min's career-topping 15th goal proved elusive during Tottenham Hotspur's 2-2 draw with Everton on Saturday, with the Korean forward largely staying quiet as captain Harry Kane did what he could to help Spurs walk away with one point.

It was Spurs who got things started as 7th-place Tottenham took on 8th-place at Everton at Goodison Park in Liverpool on Saturday,  with Kane scoring the first goal in the 27th minute to take a 1-0 lead. Just three minutes later Everton were awarded a penalty for a foul in the box and manage to convert, tying the score at 1-1 at the end of the first half.

Everton pulled ahead in the 62nd minute, with Kane equalizing again in the 68th to tie the score at 2-2 for the draw.

Although both teams earn one point from the game, Spurs were lucky not to walk away with a loss. The London club had just three shots on target throughout the game and only 12 attempts on goal,  compared to 18 attempts and seven on target for Everton. Both of Kane's goals came after the Everton defense gave up the ball in scoring position.

Despite playing the full 90 minutes, Son's involvement in the game was minimal. Although he got himself in a few good offensive positions, the Korean forward had little impact on the game and was rewarded six out of ten for his performance by football pundit website 90min.com. Football.London, a publication that is normally sympathetic to Spurs, only gave Son five out of ten.

Son is chasing a personal best 15th goal of the season, having tied his previous record of 14 goals in a single season last week against Manchester United. That goal was largely overshadowed by accusations of diving and racist attacks online that have continued for the past week.

With nine assists so far this season, Son is also only one assist away from tying his season personal best in that category as well, at 10 in the  2019-20 season.