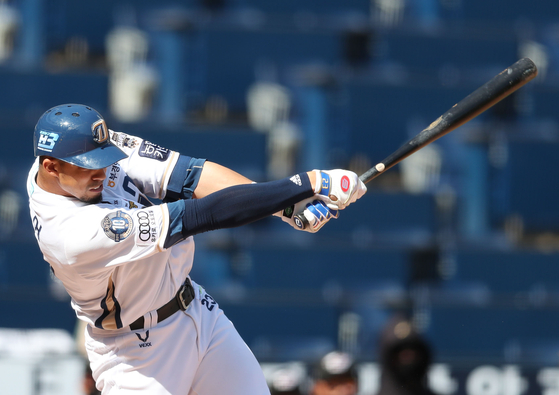 Aaron Altherr of the NC Dinos takes a swing at the end of the fourth inning against the Hanwha Eagles at Changwon NC Dinos Park in Changwon, South Gyeongsang on Sunday. [YONHAP]


The LG Twins were joined at the top of the KBO table by the NC Dinos over the weekend, but there's little breathing room between any of the ten teams after two full weeks of play.

The Twins held onto the top spot despite losing the Jamsil Derby two games to one to the Doosan Bears over the weekend. The Twins took the first game 1-0 on Friday, before the Bears came back to take Saturday's game 3-1 and Sunday's 9-1.

The series was a costly one for the fourth-place Bears, however, as catcher and key member of the batting lineup Park Sei-hyok took a pitch to the face on Friday. Park was taken to hospital and requires surgery on a fractured eye socket, taking him out of the game for the foreseeable future.

The Dinos climbed to the top of the KBO last week, before dropping back down to second with a loss to the SSG Landers. Over the weekend, the Changwon club won their series over the 8th place Hanwha Eagles, two games to one, to rejoin the Twins at the top. 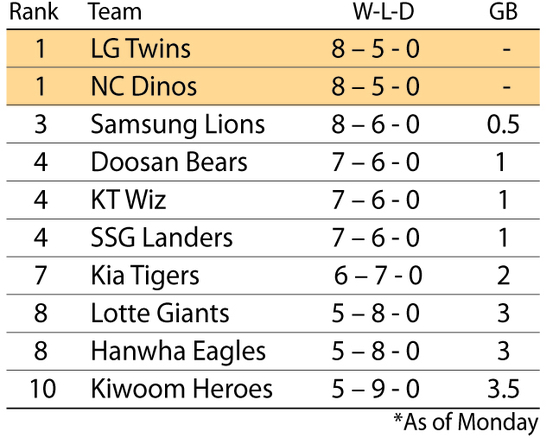 
Like last week, the Dinos success is largely thanks to its offensive prowess. Aaron Altherr leads the league in home runs, at seven, while Yang Eui-ji continues to top the table in RBIs, at 18. That ability at the plate was on display over the weekend, when Dinos hit a total of 26 runs against the Eagles.

The Samsung Lions have jumped up to third place, tying with the Dinos and Twins in terms of wins, at eight, but with one more loss, at six to their five, after avoiding the rain cancellations on opening day.

Solid offense has also helped the Lions' rise, winning their series against the 8th place Lotte Giants two games to one over the weekend. Although the Lions lost the first game of the series 3-9, the Daegu club came back with a vengeance, scoring 19 runs while conceding none over the weekend to win both games: 12-0, 7-0.

Samsung's Koo Ja-wook leads the league in batting average, at 0.438, with 21 hits, 10 RBIs, 13 runs scored and three homers in 14 games so far this season. Koo isn't the only Lion starting to roar at the plate, with Kang Min-ho also offering some serious offensive power.

The Bears are joined in fourth by the KT Wiz and the Landers. KT were the only team to pick up a sweep over the weekend against the 10th place Kiwoom Heroes, while the Landers won their series two games to one against the Kia Tigers.

After ending the first week in last place, the Wiz won their midweek series against the Bears last week before sweeping the Heroes over the weekend, 8-4, 8-5, 10-2.

Kiwoom dropped to 10th place with a five-game losing streak after dropping two to the Twins last week. Although they still scored 11 against the Wiz over the weekend, the Heroes pitching staff were unable to stop their opponents from scoring.

The Landers continue to rely on a strong offensive, although the original fireworks that marked Choi Joo-hwan's arrival at the club have died down. Choi Jeong continues to look strong, tied for second with four home runs, and MLB import Choo Shin-soo has started to perform as well.

The Giants and the Eagles continue their lackluster performance at eighth, but they still trail by only three games with a good amount of wins each so far this season.