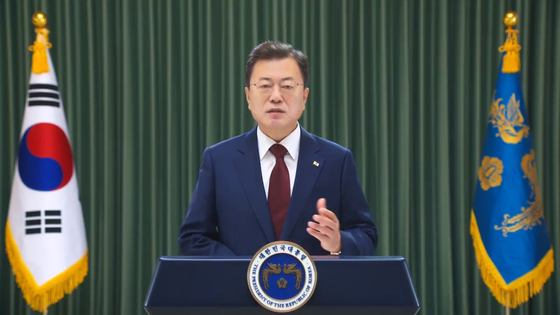 
Korean President Moon Jae-in called on Asian countries to strengthen inclusiveness and multilateral cooperation to guard against protectionism and unilateralism in an address to China's Boao Forum for Asia Tuesday.

In a video speech, Moon said that if cooperation among Asian countries, particularly South Korea, Japan and China, is strengthened, “it can play an important role in leading to the future and responding to crises.”

Moon’s remarks came ahead of his participation in U.S. President Joe Biden’s virtual Leaders Summit on Climate scheduled for Thursday and Friday. Washington has been working to strengthen cooperation with its allies and partners to counter Beijing's rising assertiveness in the South China Sea. Moon’s remarks Tuesday stressed cooperation with Beijing and referred to the economic competitiveness of Korea, Japan and China.

“There must be multilateral cooperation enhanced with inclusiveness,” said Moon at the forum's opening ceremony. “The environment for trade and investment has decreased due to Covid-19, and national interests and protectionism are expanding. It may appear to be a wall to protect the country's economy for now, but ultimately, it will become a barrier for the recovery of the global economy.”

Moon stressed the importance of “international solidarity and cooperation for co-existence and new prosperity in the post-coronavirus era.”

The four-day forum kicked off in Boao in southern China’s Hainan Province on Sunday, described as Asia’s version of the World Economic Forum in Davos, Switzerland.

The forum’s theme was "A World in Change: Join Hands to Strengthen Global Governance and Advance Belt and Road Initiative Cooperation,” and topics covered included carbon neutrality, climate change and the digital economy.

Moon noted that with the speedy digitalization of the global supply chain due to the Covid-19 pandemic, “the demand for technological advancement and innovation is also increasing.”

He added, “The key indicator of technological advancement and innovation is patents,” adding that Korea, China and Japan are leading in this area and indicating that cooperation between the three countries can help innovation and governance in the Asian region.

Moon also recognized China’s efforts to overcome the coronavirus pandemic, including donating vaccines to developing countries. Korea, he added, plans to boost cooperation to combat Covid-19, including the fair supply of vaccines.

He stressed the importance of "green recovery" and coping with the global climate crisis, stressing that Korea has a carbon neutrality target for 2050 and is pursuing a transition to an eco-friendly, low-carbon economy through the so-called Green New Deal. Moon said Korea plans to expand cooperation with Asian countries in the environmental field, including in renewable energies, responding to marine pollution and strengthening water management capabilities. He added that the Regional Comprehensive Economic Partnership signed last year could help speed along economic cooperation and restore trust in multilateralism.

Moon’s speech focusing on Asian cooperation comes amid heated Sino-U.S. rivalry over new technologies including American restrictions on a Chinese 5G equipment provider, an issue that may be raised by Washington in Moon’s summit with Biden next month. Biden last week held a White House CEO summit on semiconductors and supply chain resilience, which included Samsung Electronics.

Biden said during the summit on April 12, “China and the rest of the world is not waiting, and there’s no reason why Americans should wait,” as he stressed the importance of making safe America’s supply chain.

In a video speech for the opening ceremony Tuesday from Beijing, Chinese President Xi Jinping stressed that China has promoted regional cooperation but noted, “Bossing others around or meddling in others' internal affairs would not get one any support,” an indirect jab at the United States.

Xi was quoted in Chinese state media as stating, “We must not let the rules set by one or a few countries be imposed on others, or allow unilateralism pursued by certain countries to set the pace for the whole world.” He went on to stress advocating “common values of humanity” such as peace, development, equity, justice, democracy and freedom.

The Boao Forum, launched in 2001, was canceled last year due to the Covid-19 pandemic. This year it includes over 2,000 participants in person according to organizers, the largest international conference so far this year. Leaders from countries including Indonesia and New Zealand also joined in virtually.

Moon will also be delivering a speech at Biden’s climate summit session Thursday to explain Seoul's commitment to climate action and to request global support for the upcoming Partnering for Green Growth and the Global Goals 2030 (P4G) Summit in Seoul next month.