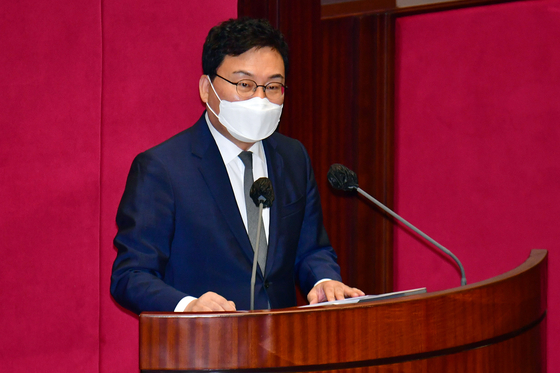 Rep. Lee Sang-jik, an independent lawmaker and former member of the ruling Democratic Party, speaks at the National Assembly on Wednesday, urging lawmakers to vote down an arrest motion against him. Lee, founder of Eastar Jet, is a suspect for alleged embezzlement and breach of trust. [YONHAP]


The National Assembly on Wednesday passed a motion to allow the arrest of a businessman-turned-lawmaker for a criminal investigation.

The legislature voted with an overwhelming majority to allow prosecutors to take custody of Rep. Lee Sang-jik, an independent lawmaker who served as a member of the ruling Democratic Party (DP) until seven months ago and the founder of budget carrier Eastar Jet. In Korea, sitting lawmakers are immune from arrest while the Assembly is in session, and cannot be detained without the legislature's approval.

Out of 255 lawmakers who participated in the voting, 206 voted in favor of the motion. Thirty-eight lawmakers voted against the motion, while 11 abstained.

Lee is the 15th Korean lawmaker ever to have been approved for an arrest motion and is also the second lawmaker approved by the 21st National Assembly for an arrest. In October last year, the Assembly voted to allow the arrest of Rep. Jeong Jeong-soon of the DP.

The prosecution has been trying to arrest Lee on charges of embezzlement, breach of trust and political funding violations. The Jeonju District Prosecutors’ Office applied for an arrest warrant to Jeonju District Court on April 9, and the court asked the government to obtain the National Assembly’s approval for allowing Lee’s arrest. The government subsequently submitted the motion on April 15.

Lee, 58, founded Eastar Jet in 2007 and chaired the company until 2012. He was elected as a lawmaker for his first term that year in Wansan B District of Jeonju, North Jeolla, with a DP ticket. He was re-elected for his second term in April 2020.

He gave up his DP membership in September 2020 after the party launched an internal probe into his corruption scandal.

In January, Eastar Jet applied for court receivership to find a way to continue its business through a merger or acquisition. It is still looking for a buyer.

Jeonju prosecutors suspected that Lee had colluded with his relative, who was working as a top finance executive of Eastar Jet, to sidestep laws to hand over company stakes to his children in 2015.

The relative was arrested and indicted last month. During the trial, Lee’s relative said he had acted in accordance with Lee’s orders.

The prosecutors also suspected Lee had caused another 6 billion won worth of loss to Easter Jet by paying off long-term loans earlier than scheduled from 2016-19.

He is also suspected of embezzling 5.8 billion won from the company from 2015-19. Some of the embezzled money was suspected to have been used to fund the operation of a DP office and finance Lee and his family’s lavish lifestyle.

Before the voting, Lee gave a speech to urge lawmakers to vote down the motion. He said there was no risk that he will flee or destroy evidence and pointed out he has been cooperating with the prosecution.

Earlier in the day, Lee issued a statement in the form of a letter to his fellow lawmakers denying some allegations, eventually fueling more controversy.

One of the allegations is that he had used 110 million won in corporate funds from Eastar Jet’s affiliate, Eastar Holdings, to buy his daughter a Porsche.

“My daughter was in a serious car accident when she was a middle school student, so she was extremely fearful about a possibility of car accidents,” Lee wrote. “She was recommended a car with a good safety reputation, and that was the Porsche, which was priced at 99 million won."