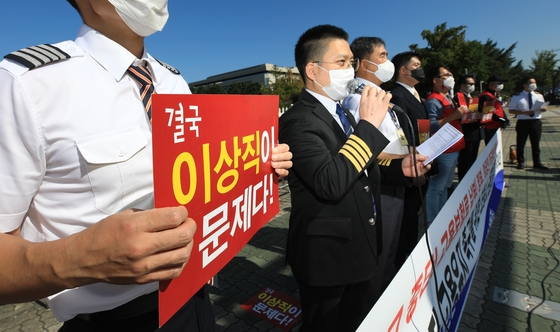 Pilot unions hold a press event in front of the National Assembly in Yeouido, western Seoul, on Tuesday, demanding the struggling Eastar Jet file for court receivership and withdraw the decision to lay off workers. [NEWS1]


Eastar Jet’s pilot union on Tuesday requested the cash-strapped airline file for court receivership and withdraw its plan to lay off more than 600 employees.


Though there are concerns for bankruptcy, the pilot union is demanding the company file for court receivership to receive wages not paid since February.

Receivership is a corporate rehabilitation procedure administered by the court. Under the court receivership, employees are entitled to a priority claim for unpaid wages. In Korea bankruptcy, assets are sold to reimburse creditors.

“Eastar Jet management should immediately withdraw the decision to lay off employees, and it should file for court receivership,” the pilot union said in a statement Tuesday.

Pilot unions from Eastar Jet and other airlines held a press event making the arguments in front of the National Assembly in Yeouido, western Seoul, on Tuesday.

On Sept. 7, Eastar Jet announced the laying off of 605 employees, saying it will only keep the 414 employees that are necessary to operate six aircraft. It plans to lay off 35 employees who are on maternity leave and 80 repair workers. It took voluntary resignations in August, but only 98 people applied.

“Employees' layoff should be the last measure taken by the company in the process of corporate rehabilitation. Employee layoffs should come after unpaid vacation, voluntary resignation, court receivership and debt settlement. If the management hasn't mismanaged the company’s financial affairs, it should file for court receivership,” said the pilot union.

The pilot union also requested employment maintenance subsidies, which the government granted to businesses affected by Covid-19. The airline didn't register for the subsidies due to lack of funds, according to the pilot union.

“Excluding Eastar Jet, all airlines are overcoming difficulties through the government’s employment of maintenance subsidies. Only Eastar Jet didn't receive the subsidy because it did not pay 500 million won [$429,000] of employment insurance.” The pilot union added, “We can’t help but doubt the company wasn't interested in employment maintenance at all, but was only focused on selling the company.”

“Rep. Lee should make a public apology and find ways to help employees as the founder of Eastar Jet,” the pilot union said, while urging the government for active support.

Since Jeju Air abandoned the acquisition of Eastar Jet in July, Eastar Jet has been trying to find another buyer. It is currently in talks with eight possible candidates.

Eastar Jet CEO Choi Jong-gu said last week that a sale is the only option.