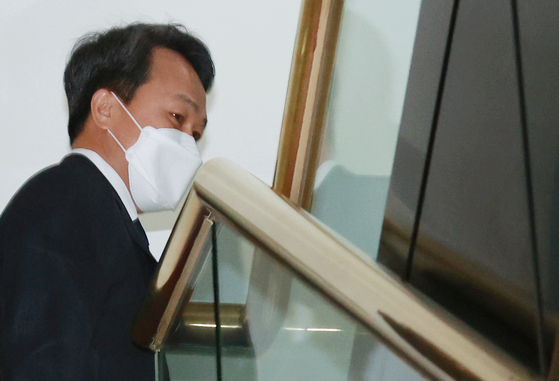 Shinhan Bank CEO Jin Ok-dong attends a meeting held by the Financial Supervisory Service sanctions committee on Thursday to dicuss the level of sanctions to be imposed on the bank and its CEO for misselling Lime Asset Management funds. [YONHAP]

Regulators went easy on the leaders of Shinhan Bank and Shinhan Financial Group despite earlier saying that the two would receive more severe punishments for the selling of dangerous investments to unsuspecting and unqualified customers by the institutions they run.

The punishments for each of them are one notch down on a five-step scale of possible punishments. An FSS sanctions committee had previously said Jin would be hit with a "reprimand warning" and Cho a cautionary warning.

Among five possible sanctions against executives, a cautionary warning is the second lightest and a caution is the lightest.

For Jin, the lighter punishment is most significant. With a reprimand warning, he would have been prohibited from accepting any position at a financial company for three years after the end of any existing engagements.

In avoiding a reprimand warning, he has become eligible to be considered for the chairmanship of Shinhan Financial Group after finishing his term as the bank's CEO, which ends at the end of 2022.

Shinhan Bank's board voted Wednesday to accept a recommendation from an FSS dispute settlement committee to reimburse between 40 and 80 percent of principal invested into Lime funds for some investors.

The cautionary warning and the caution against the executives were imposed for the selling of Lime Asset Management funds, many of which were frozen due to Ponzi-like activity and bad investments.

Despite the dangers of the investments, banks and brokerages aggressively marketed the funds to retail investors looking for safe investments.

The FSS committee also announced sanctions on Shinhan Bank, which includes a three-month partial suspension of operations and fines. The amount of fines was not disclosed.

All of the decisions by the FSS committee are subject to approval by the Financial Services Commission.