The Ioniq 5 from Hyundai Motor should probably be the most anticipated EV model in the market at the moment. It is the first model to be made on Hyundai's dedicated platform E-GMP.

The Korea JoongAng Daily recently got behind the wheel of the new EV's long range version. We were allotted a nice grayish blue colored model.

The trip started at a gas station-turned EV charging station in eastern Seoul.

The eight ultra-fast rapid chargers are Hyundai's 350 kilowatt charging system, the fastest available in Korea, and can add 100 kilometers to the range with just 5 minutes of charging for EV models with the 800 volt system.

The charging station itself was pretty groundbreaking. Instead of having to lift a heavy connector, this one descends from the ceiling to make the charging process less physically challenging. 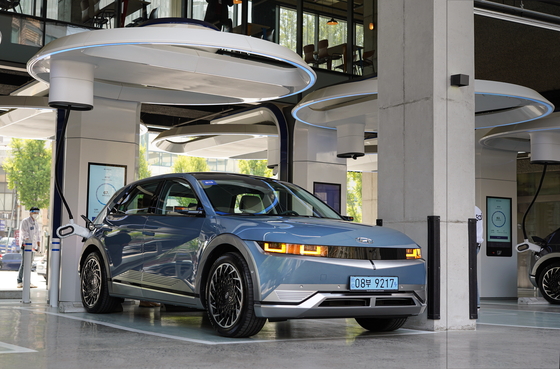 
Once the connector is plugged in, you can see how much the car is charged, of course through the digital display on the charger, but also through the LED-lit squares next to the port and also through similar LED lights located between the turn signals on the front of the car.

The square-shaped front lights, a design not seen on any other models so far, are probably going to split opinions, but the overall front design seemed to fit in well with the futuristic image the Ioniq 5 is going for.

For the demonstration, we wanted to charge up to 70 percent of the battery from 62 percent, which as the display shows will take four minutes.

The first impression once inside the car is how low the seats are, giving more headroom than is usually expected in a sedan.

When pushing back the moving console in the center, the front-row space was spectacularly spacious. When I switched back to my own car after the test drive was finished, which is an internal combustion engine vehicle, the legroom instantly felt very tight.

If the console is pushed back, getting in and out of the car through the passenger door is easy. This may not seem like a big deal to some customers, but if you live in a busy, tightly packed city like Seoul, any advantage helps.


This bulletin board looking space on the left side of the steering wheel is intended to have pictures or memos attached with magnets to make the car more homey, but I can’t imagine ever using it myself.

The digital cluster behind the steering wheel and infotainment screen in the center is integrated into a single 24-inch wide display emphasizing the low and wide stance of the vehicle. The gear stick is placed on the right side of the steering wheel.

The overall feeling of the driving performance of the Ioniq 5 was that it was very subtle and had smooth suspension. The bumps on the road were hardly noticeable and it didn’t provide that abrupt acceleration or braking that many first generation EVs struggle with. The steering was gentle, but the vehicle felt heavy.

The Ioniq 5 comes with optionable digital side cameras which need some time to get used to. These real-time feeds are on at all times and an additional real-time feed pops up on the digital cluster when the turn signal is in use.

The light-adjusted cameras were clearer, especially in tunnels, than conventional mirrors, suggesting the cameras could be a more convenient option at night.

After finishing a 2-hour drive on an 83 kilometer route, the vehicle was left with 239 kilometers left on the battery. We started our trip with 306 kilometers available, and due to the warm weather, the air conditioner was turned on for the return trip.

When fully charged, the car can drive up to 405 kilometers according to the Korean Ministry of Environment approval.

Will this Ioniq 5 actually be able to live up to market expectations and challenge Tesla? Sales have only just started in Korea and have been hampered by the global chip shortage, so we will have to wait and see if those expectations actually translate to real sales.