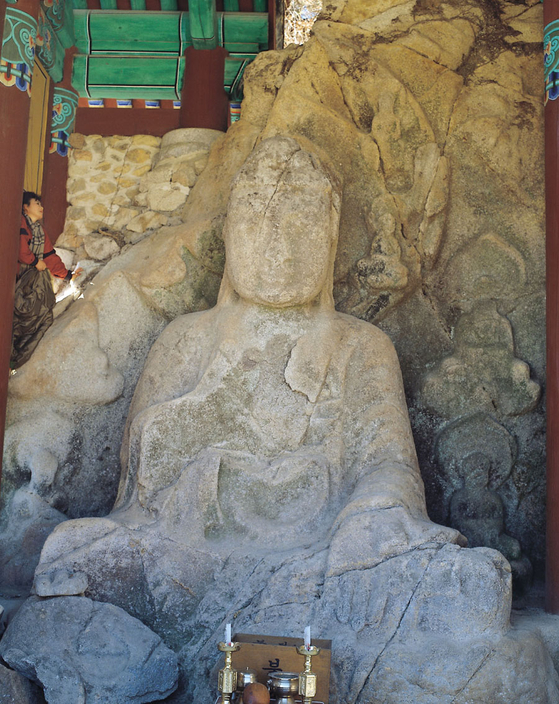 Historic records show that there was a great temple called "Hanjeol" in Bukji-ri in Bonghwa-gun, North Gyeongsang, during the Silla Dynasty (57 B.C. to A.D. 935).

The main temple was surrounded by 27 smaller temples, where about 500 monks led an ascetic life.

This 4.3-meter (14-foot) high Buddha image is carved inside a hole dug into a giant rock.

The big round face with a benign smile is lifelike.

The robe covering both shoulders has bold U-shaped folds on the chest and comes down to the pedestal past its arms.

The right hand is raised to the chest, while the left hand, giving a greater solemn impression, lies on the lap.

As for the backside of the Buddha image, there is a mandorla divided into a nimbus around the head, the body and a changed Buddha in many places.

Lotus patterns are elaborately carved into the center of the nimbus around the head.

It seems that it was made in the late 7th century, judging from its gentle image on the face and body.

With the Rock-carved Buddha Triad and Seated Buddha (Treasure No. 221) in Gaheung-dong, Yeongju, in North Gyeongsang, this is one of the greatest works of art found in Yeongju and Bonghwa.