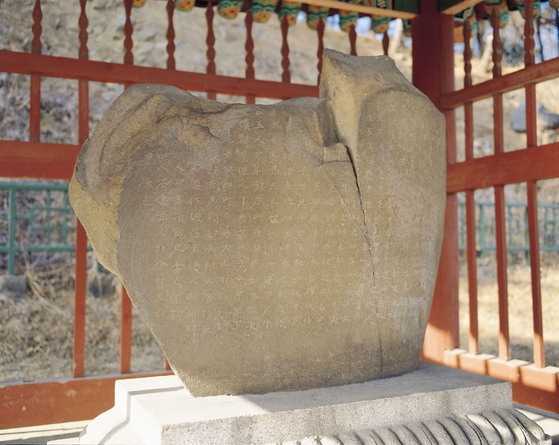 This monument, located in Jeokseongsanseong Fortress in Seongjaesan, was erected to appease the local residents after Silla took this area from Goguryeo.

This monument made of natural rock was discovered in 1978 partially buried in the ground.

The upper portion is wider and thicker than the lower portion.

Much of the upper portion is destroyed.

However, both sides remain relatively intact.

About 440 Chinese characters are believed to have been inscribed on the monument, only two-thirds of which are legible.

The printed style of writing with traces of the square style is of great importance for the study of calligraphy.

The inscription refers to a resident of Jeokseong who helped Silla expand into the Goguryeo territory and states that whoever would be loyal to Silla would also be generously rewarded.

It also contains King Jinheung's promulgation of state policies including legal and administrative systems, which well displays the property distribution and compulsory labor system of the period.

Judging from a list of 10 high-ranking officials touched on in the preface of the inscription, and Samguk sagi (History of the Three Dynasties), the monument is believed to have been erected between 545 and 550 during the reign of King Jinheung of Silla.

Although this is not a monument which commemorates border inspection trips by the king, it is considered the earlier form of such monuments and has great historical significance.