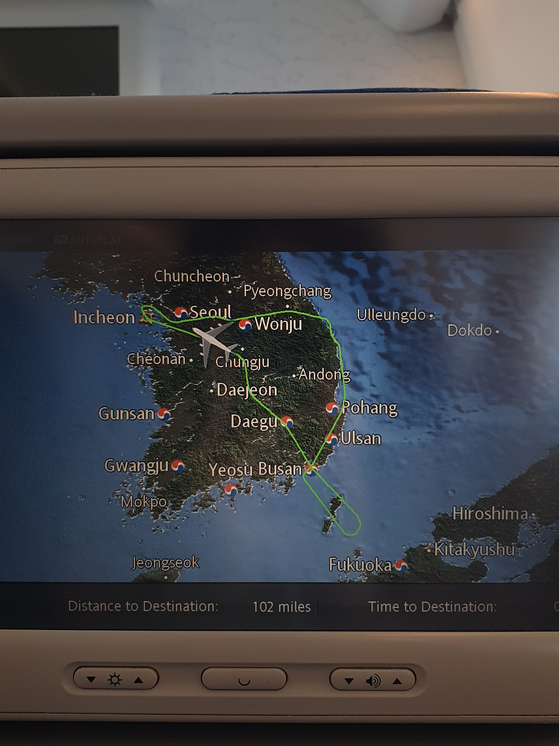 The final travel route of the “flight to nowhere” shown on the in-flight movie screen. [HALEY YANG]


INCHEON – On a sunny Sunday afternoon at Incheon International Airport, passengers wait around a boarding gate. At first glance. it looks like a typical airport scene, but on closer inspection none of the passengers have carry-on luggage.

Instead, they are carrying armfuls of shopping bags from duty-free stores. Some passengers are using multiple luggage trolleys to transport all their purchases. 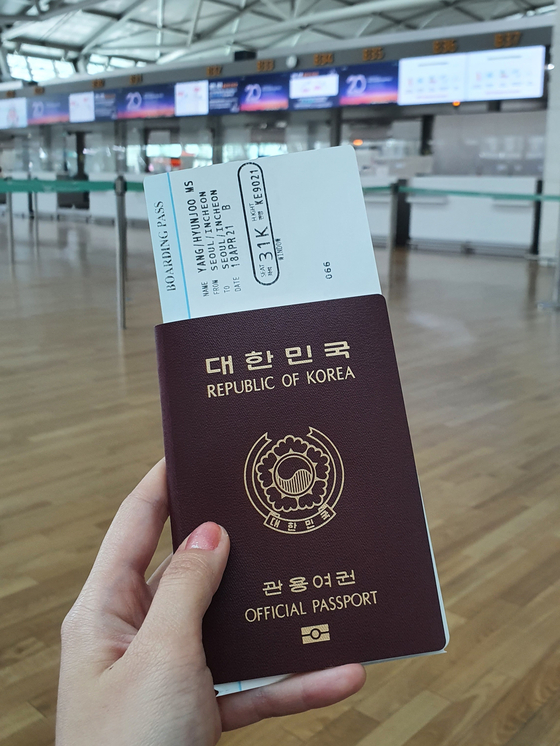 
Where are they going with no luggage and a ton of shopping? The answer is nowhere. Hanjin Travel and Korean Air’s “no-landing duty-free flight” takes off from Incheon International Airport and also lands at the same airport. Tickets start from 159,000 won ($142) and first class from 549,000 won.

The concept itself is nothing new. When airlines and travel agencies were on the verge of bankruptcy due to the Covid-19 pandemic, the Ministry of Land, Infrastructure and Transport temporarily authorized no-landing flights that enter foreign airspace in November 2020.

Since then, flights to nowhere have become a means of survival for the affected industries. Asiana Airlines, as well as low-cost carriers Air Seoul, Air Busan, Jeju Air, Jin Air and T'way have all jumped on board. 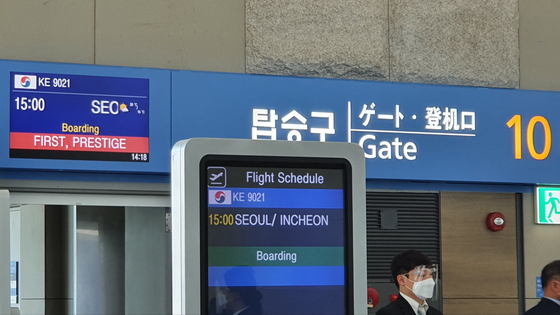 The flight to nowhere departs from Incheon International Airport and lands at the same airport two and a half hours later. [HALEY YANG]


“It’s been over a year since I’ve been on a plane because of the coronavirus pandemic,” said a woman in her 30s from Gyeonggi with the surname Kim.

“Then I read about this flight in an online news article. Since today is my birthday, I thought getting on a plane again would be a fun way to celebrate it.”

Fifty-five-year old Lee Eun-kyung from Yeoksam, southern Seoul also said she missed flying, an activity which was also accompanied with a sense of excitement.

“I regularly traveled abroad before the pandemic, but it’s been over a year. I wanted to at least feel like I’m going on a trip.” 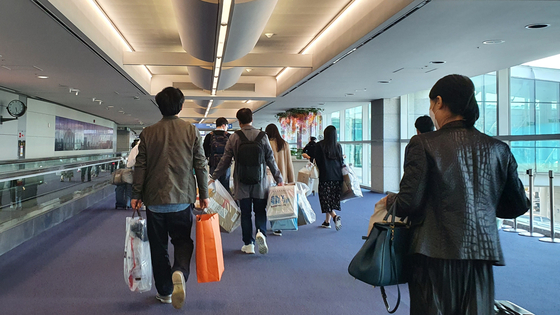 Passengers disembark and head to the immigration checkpoint. [HALEY YANG]


But nostalgia for the pre-pandemic days was not the only reason people purchased tickets. Hanjin Travel and Korean Air collaborated with Lotte Duty Free, also hit hard by the pandemic, to offer considerable discounts to passengers who shop at online duty-free stores.

Depending on the seat class, the flight comes with upgrades for Lotte Duty Free stores, instantly usable online points and discount coupons, free skincare gifts and up to 600,000 won of LDF Pay, which are points that can be used on Lotte Duty Free’s electronic payment system.

Passengers were able to pre-order items through Lotte Duty Free’s online store and pick them up at the airport prior to boarding the plane. 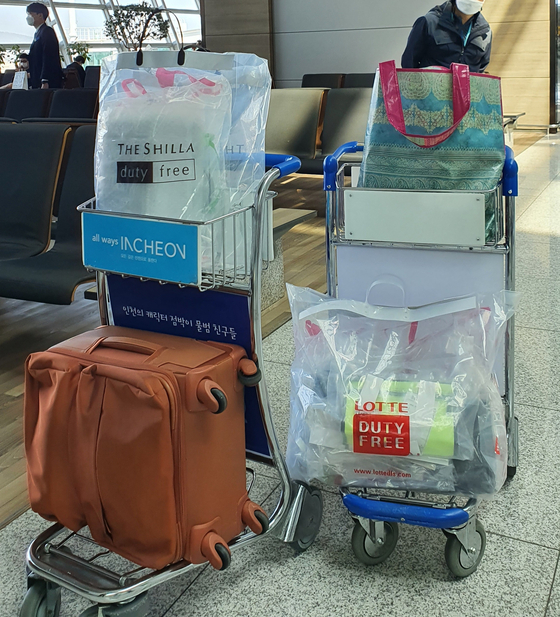 Many passengers need luggage carts to carry all the duty-free goods they purchased. [HALEY YANG]


Although domestic flights normally do not come with duty-free shopping benefits, this flight briefly enters Japanese airspace and comes back to Korea, qualifying it as an international flight; thus each passenger is eligible for tax emption on up to $600 worth of goods.

All passengers are required to have passports as it is technically an international flight and the flight is only available to Korean nationals.

“A flight to nowhere is a refreshing concept, but honestly I don’t think I would have booked if there were no duty-free shopping benefits,” Kim said.

“The discount more than makes up for the ticket price” said 46-year-old Seo Young from Bundang, Gyeonggi, who was accompanied by his cousin Lee. “We bought $1,111 worth of goods. Guess how much we ended up actually paying: $608. Nearly 50% off! It’s an amazing deal. We saved quite a bit of money.”

Seo and Lee were each pushing a luggage trolley piled high with the duty-free goods they purchased. 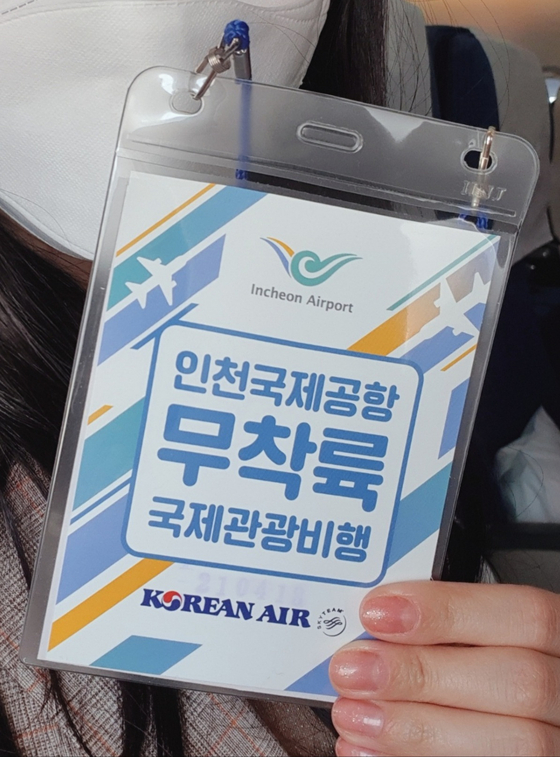 All passengers of the flight to nowhere must wear a tag that later distinguishes them from other passengers coming from overseas. [HALEY YANG]


Passengers proceeded to board the plane carrying their shopping bags. All passengers of the flight to nowhere must wear a tag that reads “Incheon International Airport non-landing international tourism flight” (translated), which are handed to them during check-in to later distinguish them from other passengers coming from overseas who are subject to the mandatory 14-day quarantine.

Due to the pandemic, public service announcements constantly reminded passengers to wear a face covering at all times, and that there will be no in-flight food or refreshments. The middle row was largely left empty and everyone sat one seat apart to abide by social distancing as much as possible.

The flight is approximately two and a half hours without any refreshments, but people on board seemed to appreciate that this is the closest thing to traveling abroad until the pandemic ends. 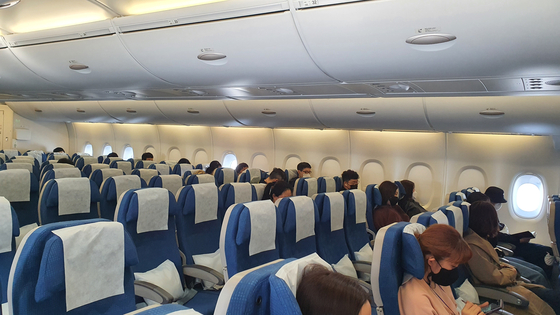 The middle row is largely left empty and everyone sits one seat apart to abide by social distancing as much as possible. [HALEY YANG]


The cabin crew were prepared with additional entertainment to keep the flight interesting. A specialty of the flight to nowhere was the pilot’s announcements now and then, explaining the current location of the plane.

“Attention passengers, we are flying over Gangneung, Gangwon right now. On your right you can see the Taebaek mountain range and the East Sea on your left.”

“We are flying in Japanese airspace near Tsushima Island. We will re-enter Korean airspace in about three minutes.” 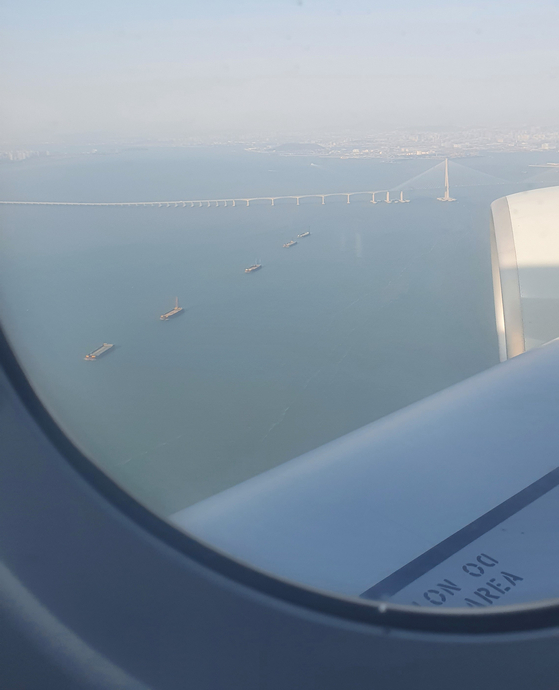 A view of Incheon Bridge from the plane. [HALEY YANG] 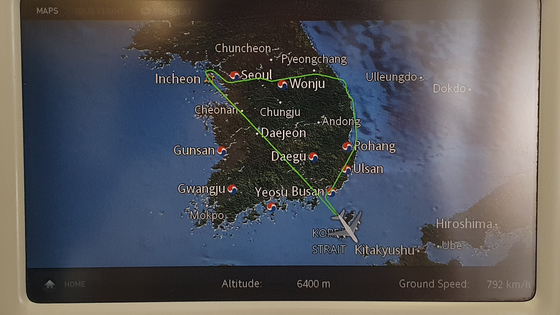 The flight to nowhere briefly enters Japanese airspace, qualifying it as an international flight. [HALEY YANG]


Knowing the exact location above Korea, instead of having a vague idea like during most flights, adds to the fun. The cabin crew also held a giveaway toward the end of the flight.

When the plane lands, the in-flight movie screen shows a somewhat amusing travel route: A semicircle hovering over the southern part of the Korean Peninsula. 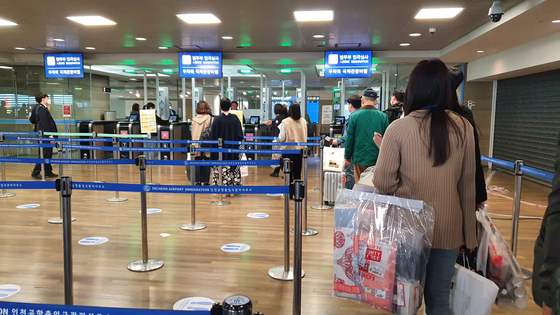 Passengers re-enter Korea through a separate immigration checkpoint specifically for this flight. They are not subject to the mandatory 14-day quarantine. [HALEY YANG]


Passengers hopped off the plane and headed to a separate immigration checkpoint specifically for this flight. They were free to head home with their hauls, or to wherever their next destination was.

“With this much discount, I think a group of friends can split the cost of this flight and shop for duty-free items,” said Seo. “Then one person can take one for the team to pick up the goods and take a fun plane ride as well. I’m actually [doing that now] and doing people around me a favor thanks to this flight.” 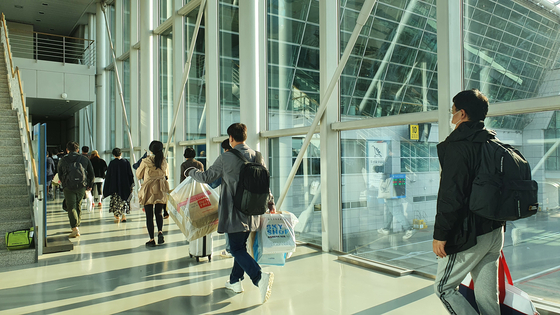 Passengers disembark and head to the immigration checkpoint. [HALEY YANG]


More of these flights to nowhere are scheduled for May and beyond. Reservation rates are high according to an official from Hanjin Travel, perhaps thanks to the exceptional duty-free deal.

Hanjin Travel is also planning flights to nowhere that take off at Gimpo International Airport in the near future.

Why not take a flight down memory lane and reminisce on life before the pandemic?