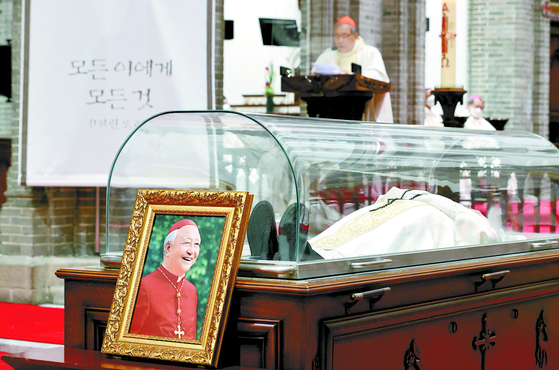 A mass is held at the Myeongdong Cathedral in central Seoul Wednesday morning after Cardinal Nicholas Cheong Jin-suk, a former Catholic archbishop of Seoul, died the previous night at the age of 89. His body is laid in a glass coffin at the cathedral, and the public will be able to pay respects through Friday. He will be buried Saturday. [YONHAP]


Cardinal Nicholas Cheong Jin-suk, a former archbishop of Seoul, died Tuesday at the age of 89.

Cheong passed away at 10:15 p.m. at the Catholic University of Korea Seoul St. Mary's Hospital, according to the Catholic Archdiocese of Seoul.

He had been hospitalized since February for an unspecified ailment, and his heath deteriorated over the past weeks. Cheong has made plain for years that he did not wish to be put on life support at his end.

A requiem mass was held around midnight in Myeongdong Cathedral in central Seoul. It was presided over by Cardinal Andrew Yeom Soo-jung, the current archbishop of Seoul. The mass was held for a limited number of bishops, priests and reporters.

Yeom said in a eulogy that “omnibus omnia” was the lifelong motto of Cheong, meaning in Latin, “All things to all men.”

“Cardinal Cheong gave everything he had to the church and to the poor," Yeom continued. "The cardinal was a free person, unconstrained by materialistic things."

Cheong signed the paperwork to donate his organs after his death in 2006. His corneas were successfully transferred to two recipients the previous day, said Heo Young-yeop, a spokesman for the Archdiocese of Seoul, Wednesday.

Last month, the cardinal donated the balance in his bank account to soup kitchens run by the Seoul archdiocese and religious education institutes. He also donated 8 million won ($7,188) to the staff at the hospital who took care of him, said Heo.

The Archdiocese of Seoul said Cheong last words were, “Thank you. Always be happy. It is God’s will for you to live happily.”

Cheong was born in December 1931 to a devout Catholic family in Seoul.

He majored in chemical engineering at Seoul National University but decided to become a priest after experiencing the horrors of the 1950-53 Korean War.

He earned a degree in theology from Catholic University in Seoul in 1961 and was ordained a priest the same year. Cheong served in a parish in Seoul and also taught at Songsin High School.

He later received a masters’ degree in canon law from the Pontifical Urban University in Rome in 1970.

Cheong was named bishop of Cheongju in North Chungcheong by Pope Paul VI in 1970, when he was 39, becoming the youngest bishop in Korea at the time.

He served in that position until 1998, when he was appointed the third archbishop of Seoul. In the same year he was named the apostolic administrator of the diocese of Pyongyang. Cheong served in both posts for the next 14 years.

He was made a cardinal in 2006 by Pope Benedict XVI, becoming Korea's second cardinal after the late Cardinal Stephen Kim Sou-hwan, his predecessor as archbishop of Seoul.

He served in various leadership positions in the Catholic community, including as president of the Korean Bishop’s Conference from 1996 to 1999.

As a canon law expert, Cheong wrote dozens of books over the years including helming a project to translate the 1983 Code of Canon Law into the Korean language. The first Latin-Korean edition was published in 1989 with the approval of the Vatican.

He wrote in a post on his social media accounts, “The passing of Cardinal Nicholas Cheong Jin-suk, who delivered peace not only to Catholics but to all the people, is deeply regrettable.”

Moon added, “The cardinal left us great teaching on sharing and coexistence by practicing the motto of 'omnibus omnia' until the last moment of his life,” adding, “the most important thing more than money is a people-centered policy.”

Under diocesan guidelines, the funeral will be held over five days. Cheong’s body was placed in a glass coffin in Myeongdong Cathedral, and the public will be able to pay condolences from 7 a.m. to 10 p.m. through Friday. They must respect social distancing guidelines.

Cheong will be buried in a Catholic cemetery in Yongin, Gyeonggi, near other notable priests including Cardinal Kim. 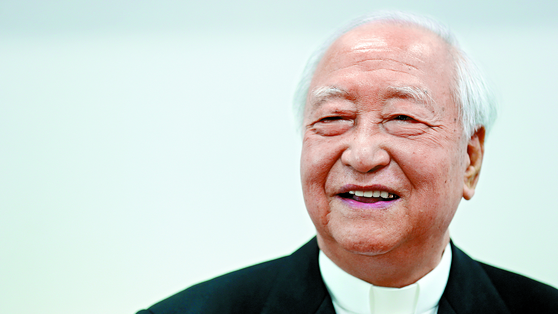