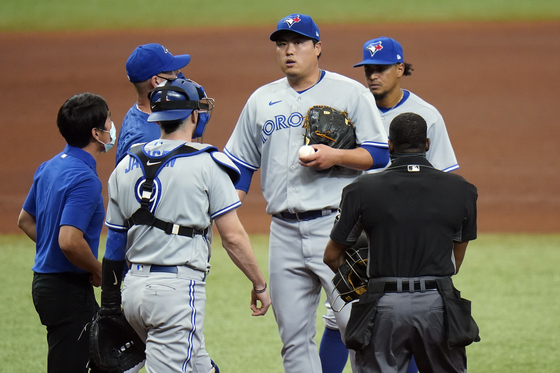 Toronto Blue Jays starting pitcher Ryu Hyun-jin, center, reacts after getting hurt during the fourth inning of a baseball game against the Tampa Bay Rays on Sunday. [AP/YONHAP]


Toronto Blue Jays ace Ryu Hyun-jin has been placed on the 10-day injured list after he was removed from a game on Sunday due to a gluteal strain.

Ryu left the mound in the fourth inning after throwing 62 pitches against the Tampa Bay Rays on Sunday. The Blue Jays later announced he had a "minor glute strain."

Ryu's addition to the injured list comes as a bit of a surprise as both manager Charlie Montoyo and Ryu himself had seemed confident that he wouldn't miss any playing time.

Montoyo described the injury as "day-to-day" on Tuesday and seemed to suggest that Ryu was unlikely to miss his spot in the rotation.

Yet despite those hopes, Ryu will now miss at least one start.

"Our hope right now is that he's going to miss a start and hopefully throw his next start, probably next week," Montoyo was quoted as saying on MLB.com.

"It's like what we thought it was with a mild strain, but because of the days off, he's only going to miss one start and that's how we see it right now. We talked to him, and he said he was fine with that. He could pitch next week in Oakland."

Despite struggling with injuries earlier in his career, Ryu has been problem-free since August 2019, when he was briefly sidelined due to neck issues.