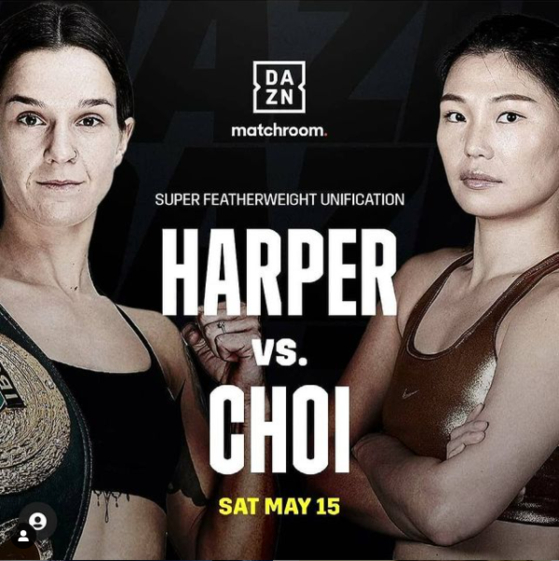 Choi is currently the only professional boxing world champion in Korea, having won 18 out of 19 title fights.

In 2004, Choi defected from North Korea with her family. Four years later, she won her first featherweight championship against Xu Chun Yan of China at the age of 18, defending that title seven times until 2013.

In 2013, she changed her weight division to super-featherweight, winning her first title against Fujin Raika of Japan.

Choi’s upcoming match is against British boxer Terri Harper at the AO Arena in Manchester, England.

Choi has 18 wins with one draw and has knocked out four opponents in her professional career, while Harper, who holds the same world title as Choi but from two different organizations — the World Boxing Council and International Boxing Organization — is also undefeated with 11 wins, no losses, one draw, and six knockouts.

According to boxing statistics accumulator BoxRec, Choi ranks 13th in the super-featherweight category among all boxers in all competitions, while Harper ranks third. Even with more wins, Choi ranks lower because she does not have as much international experience, with nearly all of her fights against international opponents having taken place in Korea.

The May fight has been dubbed the "Super Featherweight Unification" as it will attempt to name one overall super-featherweight champion across the three different boxing organizations.

Kwon Soon-woo falls out of Wimbledon after tough doubles match