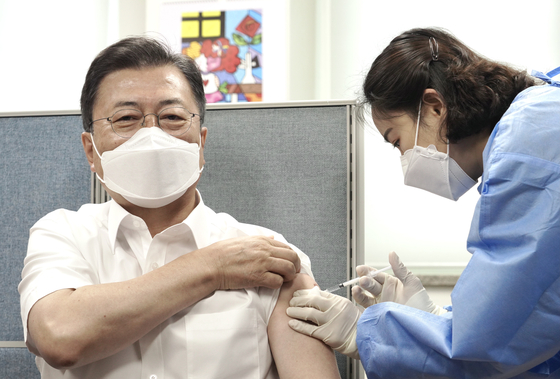 President Moon Jae-in, left, receives the second dose of the Covid-19 vaccine at the Jongno District Public Health Center on Friday. He received the second doze of the AstraZeneca vaccine earlier than scheduled in order to visit Washington for his summit with U.S. President Joe Biden on May 21. [YONHAP]


President Moon Jae-in will hold his first summit with U.S. President Joe Biden on May 21 at the White House, the two countries’ presidential offices announced Friday.

“Accepting President Biden's invitation, Moon will visit Washington and hold the summit at the White House on May 21,” Chung Man-ho, presidential secretary for communication, said. “Holding the face-to-face summit early, despite the Covid-19 pandemic, demonstrates the importance of the Korea-U.S. alliance.”

Chung said, "The two leaders are expected to reaffirm the strength of the alliance and expand and advance the bilateral comprehensive and mutually beneficial cooperative relationship based on the friendships between both the two leaders and the two countries’ people.”

A wide range of issues, including Seoul and Washington’s cooperation to denuclearize the Korean Peninsula and establish a permanent peace regime, will be discussed at the summit, Chung said. Economic and trade issues and global challenges such as climate change and the pandemic will also be discussed.

The White House also confirmed Moon’s visit. "President Moon's visit will highlight the ironclad alliance between the United States and the Republic of Korea, and the broad and deep ties between our governments, people and economies," said White House spokeswoman Jen Psaki said in a statement.

The event will mark Biden's second in-person summit with a foreign leader since he took office on Jan. 20. His first summit was with Japanese Prime Minister Yoshihide Suga.

While the two countries confirmed the date of the summit, other details of Moon’s trip have not been finalized, said a senior presidential aide.

The summit is expected to take place around the time when the Biden administration finalizes its North Korea policy.

While North Korea will be a key issue at the summit, the source denied that South Korea’s possible joining of the Quadrilateral Dialogue, or Quad, alliance of the United States, Japan, India and Australia was fixed as an agenda. The security alliance is considered to be part of Biden’s plan to contain China.

“We are open to the possibility of any cooperation with Quad, if it fits our principles such as openness, inclusiveness and transparency and if it contributes to our national interests and regional and global peace, cooperation and prosperity,” Moon's aide said.

It is still up in the air whether Moon’s entourage will include business leaders. “They were part of the delegation in the past, but we are still reviewing the possibility because of the Covid-19 situation,” he continued.

Meanwhile, Moon received his second shot of the Covid-19 vaccine on Friday, a few weeks earlier than initially scheduled, to prepare for his trip to Washington.

Moon got his first shot of the AstraZeneca vaccine at Jongno District Public Health Center near the Blue House on March 23 for his trip to Britain to attend the Group of 7 summit in June. At the time, he was scheduled to get the second dose in May.

The date was advanced as Seoul and Washington agreed to Moon’s trip to the United States for the summit with Biden on May 21.

The AstraZeneca vaccine requires at least two shots, the second normally taken after about eight to 12 weeks. The Korea Disease Control and Prevention Agency said it allows a four-week interval in some emergencies, such as an inevitable overseas travel.