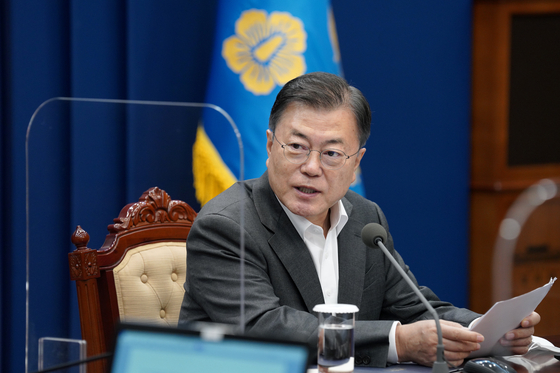 President Moon Jae-in on Monday speaks at a senior secretariat meeting at the Blue House. [YONHAP]


President Moon Jae-in said Monday that his upcoming trip to the United States will be used to make Korea a global hub of vaccine production.

“I will use the upcoming trip to the United States as an opportunity to strengthen cooperation in the field of [Covid-19] vaccines and make Korea a global hub of vaccine production,” Moon said in his opening remarks for a senior secretariat meeting at the Blue House.

Moon said his goals for his final year in office are overcoming the pandemic and making a leap toward economic recovery. “The government will do its best to normalize the people’s lives by enforcing disease prevention and control measures and proceeding with inoculation without any delay.”

The remarks were made ahead of Moon’s trip to the United States later this week and a summit with U.S. President Joe Biden at the White House on Friday.

Moon’s remarks also came amid speculation that a U.S. pharmaceutical company will start production of Covid-19 vaccines in Korea. On May 10, Jeong Eun-yeong, a senior health ministry official, said in a media briefing that discussions are underway between a U.S. company and a Korean pharmaceutical firm to produce mRNA vaccines in Korea. She refused to elaborate further, citing confidentiality agreements.

Moderna and Pfizer are producers of mRNA vaccines, and speculation is high that Moderna will manufacture its products in Korea. The company reportedly started a process to open a subsidiary here.

SK Bioscience produces AstraZeneca vaccines in Korea, although it is a viral vector vaccine, not mRNA. The company will also begin manufacturing Novavax viral vector Covid-19 vaccines as early as June.

Earlier in the day, Moon had a meeting with Prime Minister Kim Boo-kyum at the Blue House. It was the first weekly meeting between the two leaders since Kim was formally appointed last week.

“Please do your best to encourage the people to be vaccinated and speed up the country’s vaccination process by promising that there will be more freedom when they are inoculated,” Moon was quoted as telling Kim by presidential spokeswoman Park Kyung-mee.

The government aims to inoculate 13 million people by the end of June, with the goal of achieving herd immunity no later than November.