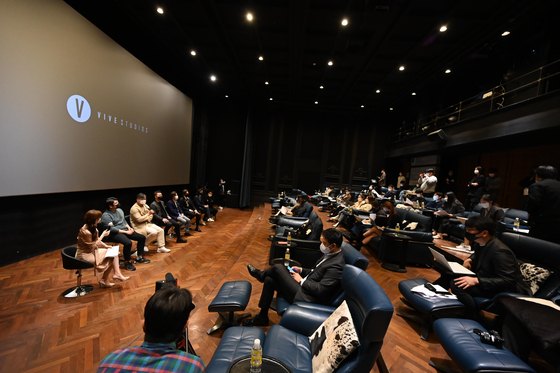 The film, in which the protagonist teleports from the streets of Gangnam to the mountains of Iceland, was filmed using a large-sized LED screen in Vive Studios’s studio. As the locations were displayed on the screen, the VIT algorithm merged the actor with the virtual background in real time, simultaneously correcting colors and lighting.

Vive Studios specializes in such metaverse-related content using virtual production and computer graphic; Metaverse, a portmanteau of the prefix “meta” (beyond) and “universe,” is defined by Forbes as “persistent, shared, 3D virtual spaces linked into a perceived virtual universe.”

“Before VIT, Korean production companies had to purchase control systems from abroad due to lack of [domestic] technology,” said Stanley Kim, founder & CEO of Vive Studios.

“Filming on location has become difficult due to the Covid-19 pandemic, but with VIT, we can shoot realistic scenes set abroad or in space in front of an LED wall.”

Kim added that such virtual production technology previously only existed in the United States.

The screening also showcased the music video for “Broken Me” by BM, a member of mixed-gender group KARD, which features on the soundtrack of “The Brave New World,” which was also filmed using VIT.

Vive has researched metaverse-related technology since 2003 based on its ample experience in creating virtual reality content such as extended reality and augmented reality, as well as producing advertisements and games.