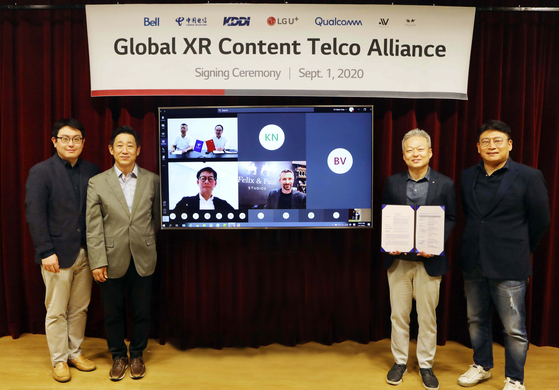 LG U+ executives pose with XR Content Telco Alliance partners after signing an agreement on Tuesday at the company's headquarters in Yongsan, central Seoul. [LG U+]

The purpose of the alliance is to create high-quality AR and VR content together. Members will jointly invest to create large-scale AR and VR videos and take away exclusive distribution rights.

This is the first alliance where companies from multiple countries have joined forces for the purpose of developing 5G content, LG U+ said. More telecom companies are in talks to join the group, but membership will be limited to one operator per country as the purpose of the alliance is to strengthen members’ competitiveness in respective markets.


While companies will take turns, LG U+ will be the first to hold the position of “facilitator,” which will function as the alliance’s chairperson in monthly meetings.

“Because we started out earlier than others — investing in our AR studio and learning how to create videos on our own — we received positive feedback from other companies who found our knowledge helpful. That’s why we got to chair the alliance first,” said Kim Jun-hyung, vice president of 5G service at LG U+, during an online press conference Tuesday.

The idea of combining forces with overseas partners came as LG U+ was preparing to launch its 5G network last year.

Finding “killer content” that would boost user demand for 5G remains the big question for telecommunications operators. VR and AR content are one possible answer as the large bandwidth, low latency features of 5G networks lay the ground for the distribution of higher quality content compared to the previous 4G LTE environment.

LG U+ has been particularly keen about AR and VR, pouring in investment for the studio, partnerships and mobile platform to familiarize the technology with its users. But investing individually has its limits, especially in securing sources to make competitive AR and VR content.


“It’s true that the XR content released so far wasn’t powerful enough to wow consumers. But we need high-quality content to generate funds to be poured again into investment. That’s the virtual cycle we want and why the alliance is necessary,” said Choi Yoon-ho, LG U+’s vice president for AR and VR services.


Within the alliance, studios will suggest ideas for VR and AR content, and other members will decide whether to investment.

The first outcome of the XR Alliance will be the VR video series “ISS Experience,” filmed in space.

Composed of four 25-minute episodes, "ISS Experience" is the first 3-D VR content filmed in space, which Felix & Paul Studios made in partnership with NASA and the Canadian Space Agency. It will be unveiled in November.