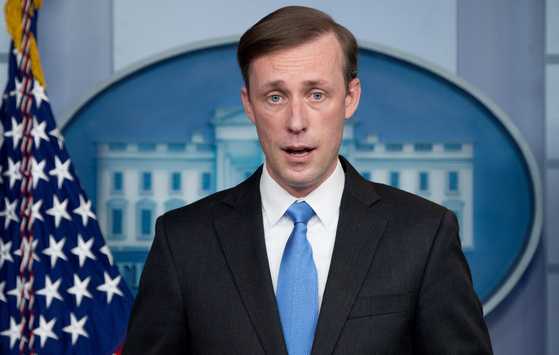 U.S. National Security Adviser Jake Sullivan speaks during a press briefing in the White House in Washington on Feb. 4. He said in an interview Sunday that the United States does not aim for "hostility" and is prepared to engage in diplomacy with North Korea. [AFP/YONHAP]


U.S. National Security Adviser Jake Sullivan said that Washington’s policy toward Pyongyang is not aimed at “hostility,” stressing that the Joe Biden administration is prepared to engage in diplomacy with North Korea for the goal of complete denuclearization.

“Our policy towards North Korea is not aimed at hostility,” Sullivan told ABC News in an interview Sunday. “It's aimed at solutions. It's aimed at ultimately achieving the complete denuclearization of the Korean Peninsula.”

His remarks come after the White House confirmed Friday that it has completed its comprehensive review of North Korea policy which will opt for a “practical approach” rather than a sweeping top-down “grand bargain” sought under the previous Donald Trump administration or relying on the strategic patience of the Barack Obama government.

Despite three meetings between Trump and North Korean leader Kim Jong-un, the two sides failed to narrow differences on the sanctions relief needed for steps toward denuclearization, leading to a standstill in negotiations since 2019.

Sullivan in the interview added, “We're prepared to engage in diplomacy towards that ultimate objective, but work on practical measures that can help us make progress along the way towards that goal.”

Washington appears to be extending an olive branch to Pyongyang, using language favored by the North such as “complete denuclearization of the Korean Peninsula,” rather than “complete denuclearization of North Korea,” which has been used by some Biden administration officials including U.S. Secretary of State Antony Blinken in his joint press conference in March in Seoul.

Sullivan said, “We believe that rather than all for all or nothing for nothing, a more calibrated, practical, measured approach stands the best chance of actually moving the ball down the field towards reducing the challenge posts by North Korea’s nuclear program.”

The White House previously said it tried to make diplomatic contact with North Korea since mid-February but that Pyongyang had been unresponsive.

The United States will likely be cracking down on North Korea over its human rights abuses alongside denuclearization negotiations. Thus, with the completion of its policy review, the Biden administration is expected to soon appoint a new special envoy for North Korean human rights, a position that has been left vacant for four years.

South Korean Foreign Minister Chung Eui-yong and Blinken were set to hold bilateral talks Monday on the sidelines of a Group of 7, or G7, foreign ministers’ meeting in London which will run through Wednesday. Chung and Blinken were expected to discuss the new U.S. policy on North Korea and coordination-making progress in the denuclearization of the peninsula.

They were also expected to discuss preparations for the first summit between Presidents Moon Jae-in and Biden in Washington on May 21. Chung and Blinken were also expected to hold a trilateral meeting with their Japanese counterpart, Toshimitsu Motegi, on the sidelines of the G7 meeting, which would mark the first talks between the new top envoys of Seoul and Tokyo.

South Korean National Police Agency Commissioner General Kim Chang-yong Sunday ordered the Seoul Metropolitan Police Agency to conduct a probe into a defector group, Fighters for a Free North Korea, who claimed to have sent 500,000 anti-Pyongyang propaganda leaflets in 10 balloons across the border to the North over the course of last week. The South Korean National Assembly passed a law last December banning the sending of such leaflets across the border for security reasons, a move criticized by rights groups and U.S. lawmakers as violating freedom of expression.