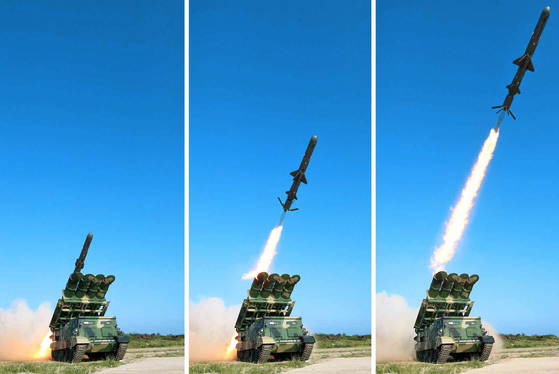 The launches were staggered and appeared to have flown short distances at low altitudes.

The JCS only confirmed the launches after the U.S. media reported on them and didn’t offer further details such as specific launch time, missile type or flight distance.

On the delay in the report, a JSC official said, “It is not necessary to disclose all trends or information related to North Korea.”

North Korean leader Kim Jong-un did not appear to have personally supervised the launches, and his official media has yet to report about them.

North Korea last launched multiple short-range cruise missiles from Munchon in its eastern Kangwon Province into the East Sea on April 14, 2020, on the eve of the birthday of North Korean founder Kim Il Sung, a major national holiday, and South Korea's general elections. Those launches were revealed right away by the JCS. 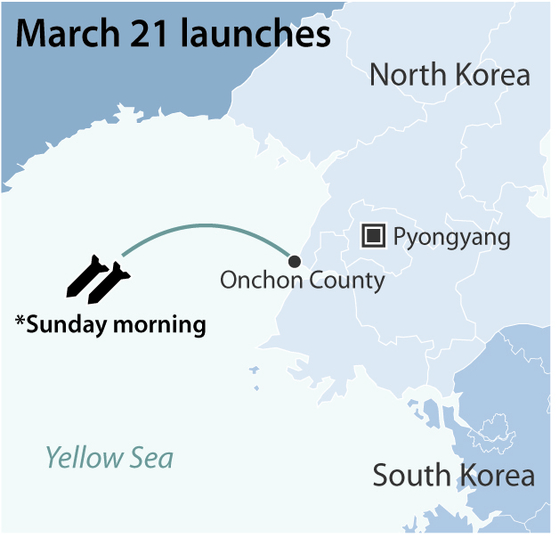 The missiles launched last April were believed to be KN-19 or Kumsong-3 coastal defense missiles, and estimated to have flown around 150 kilometers.

Launches of cruise missiles are not considered violations of UN Security Council resolutions, which ban North Korea from testing ballistic missiles. Cruise missiles are unmanned vehicles that are propelled by jet engines rather than rockets.

Pyongyang condemns such joint exercises as war rehearsals, and Kim Yo-jong, the North Korean leader’s powerful younger sister, issued a statement last week threatening to scrap an inter-Korean military agreement from 2019 as she lambasted the latest drill. In the North’s first message directed at the Biden administration, Kim warned that Washington “had better refrain from causing a stink at its first step."

Since late 2017, North Korea has halted nuclear tests and longer-range missile launches to better engage with Washington, but has continued with shorter-range missiles launches.

Analysts view the latest launches as North Korea’s attempt to test the new U.S. administration without being too provocative.

A South Korean military official said, “We detected the activity in real time under close coordination between South Korea and the United States,” adding that the military is in the process of analyzing specific details.

U.S. President Joe Biden told reporters when asked about the North’s missile launches en route to Ohio Tuesday, “We have learned that there is nothing much has changed.”

When asked if it could be considered a provocation by North Korea later in the day, Biden replied, “No, according to the Defense Department it’s business as usual. There’s no new wrinkle in what they did.”

Senior Biden administration officials also confirmed that the missiles were a “short-range system” not covered by UN Security Council resolutions.

One senior administration official told reporters in a telephone press briefing Tuesday, “We’re also aware of military activity last weekend by the DPRK that is not sanctioned under UN Security Council resolutions restricting the ballistic missile program,” calling the action “in the category of normal activity.” DPRK is the acronym for the North’s official name, the Democratic People’s Republic of Korea.

The official added, “North Korea has a familiar menu of provocations when it wants to send a message to a U.S. administration: ballistic missiles of various range, mobile and submarine launch platforms, nuclear and thermonuclear tests. Experts rightly recognized what took place last weekend as falling on the low end of that spectrum.”

The Biden administration is in the final stages of a comprehensive review of its North Korea policy.

Last week, U.S. Defense Secretary Lloyd Austin and Secretary of State Antony Blinken made their first overseas trip and discussed North Korean denuclearization with their counterparts in Tokyo and Seoul.

U.S. National Security Adviser Jake Sullivan is set to hold talks with South Korean counterpart Suh Hoon and Japan’s Shigeru Kitamura in the United States next week to discuss the results of the review, according to a senior Biden administration official.

The official noted that there is a lack of active dialogue with North Korea despite multiple attempts by the United States across two administrations “to engage,” but added, “We do not see the activity that took place this weekend as closing that door.”

North Korea held an artillery firing drill on the island in November 2019, which Seoul’s Defense Ministry said was in violation of a 2018 inter-Korean military agreement aimed at reducing military tension on the border.