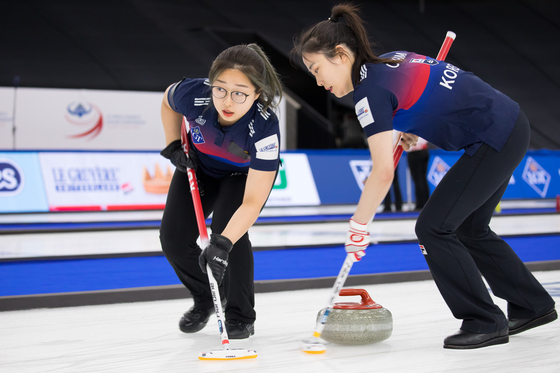 Team Korea's Kim Seon-yeong (left) and Kim Cho-hee sweep their brushes in the path of a moving stone against Scotland at the Curling World Championship in Calgary, Canada on Sunday. [WCF]


Team Kim picked up their first two wins against Scotland and Italy at the 2021 Women's World Curling Championship on Sunday.

Despite entering the tournament as the second-highest ranked team, Korea got off to an inauspicious start at the Women's World Curling Championship, dropping their first four matches against Switzerland, Russia, United States and Germany.

On Sunday, Team Kim looked strong on the sheet, beating Team Muirhead of Scotland 8-4. Later that day, Team Kim showed a bit of flair against Team Constantini of Italy with a big comeback, gaining two points at the very last tenth end to finish at 7-6.

At four wins and two losses, Team Kim managed to climb from 13th to 10th on the table.

The top six teams from the Curling World Championships will skip the preliminary rounds at the 2022 Beijing Olympics.

Team Kim were set to take on Canada on Monday as of press time, with Estonia following on Tuesday, Denmark and Japan on Wednesday, China and Sweden on Thursday and the Czech Republic on Friday.