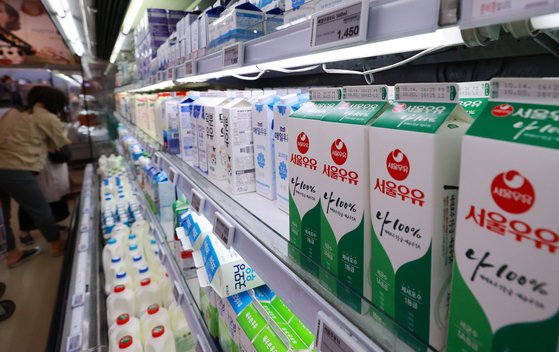 Milk sold at a discount mart in Seoul on Wednesday. Fuel and grocery prices contributed the most in driving up overall consumer price in September. [YONHAP]

With international fuel prices rising, consumer prices this year are expected to rise above an earlier government forecast of 1.8 percent for 2021.

Yet Finance Minister Hong Nam-ki stressed that the government will do its best to keep the rise within 2 percent.

According to Statistics Korea on Wednesday, consumer prices in September grew 2.5 percent compared to a year ago.

Consumer price hikes have been above 2 percent every month since April.

Compared to a year ago, gasoline prices rose 21 percent in September, while diesel price were up 23.8 percent. Liquefied petroleum gas (LPG) for automobiles was up 27.7 percent.

Manufactured goods rose 3.4 percent, the sharpest increase in more than nine years. The last time their prices grew at this rate was in May 2012, when they increased 3.5 percent.

While vegetable prices fell 0.6 percent, livestock prices including pork, beef and eggs surged 13.9 percent, largely thanks to increase demand during the Chuseok holiday.

Inflationary pressure is expected to rise with the government raising electricity bills.

Inflation has become a risk factor around the world.

International Monetary Fund managing director Kristalina Georgieva said her organizations global economic growth forecast for the year, which will be announced next week, will be lower than earlier projections.

“We now expect growth to moderate slightly this year,” Georgieva said during a virtual speech at Bocconi University, Italy. “The risks and obstacles to a balanced global recovery have become even more pronounced.”

In July, the IMF raised its global economic growth outlook for this year from 5.5 percent to 6 percent.

The IMF chief cited uneven vaccination distribution as a key factor holding back a global economic recovery along with inflation and mounting debt.

She said inflationary pressure will continue to affect some developing countries in 2022, triggering hikes in interest rates and tightened financial regulations.

Korea's Finance Minister said that even if consumer prices exceed the government’s target, it will not be a major problem for the economy.

“Consumer prices are likely to exceed the government’s annual target of 1.8 percent [for 2021],” Hong said on Wednesday during the National Assembly’s annual audit.

In June, Hong projected that consumer prices would ease in the second half.

But they haven't and government emergency relief grants for most Koreans could fuel inflation.

“We will try to reduce the burden on Korean companies and work on preventing the factors driving up consumer prices,” Hong said.

“The public's utility bills will be frozen in the second half,” Hong said. “But even if there is a need to raise them [due to rising international fuel prices] we will push it off until next year so that it will not raise [overall] consumer prices.”