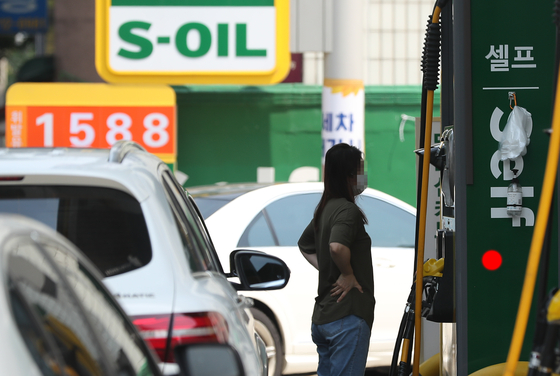 Drivers pumps fuel at a gas station in Seoul on Wednesday. Inflation rose to its fastest rate in nine years in May largely due to sharp increase in petroleum prices. Due to rising international crude prices, petroleum prices rose 23.3 percent, the sharpest since August 2008 when it rose nearly 28 percent. The statistics agency cited the sharp drop in international crude prices due to Covid-19 last year as the factor that boosted the rise for this year's as well as growing expectation of a global recovery. [YONHAP]


Consumer prices rose 2.6 percent in May, the fastest pace in nine years, adding to concerns about inflation in the wake of the pandemic.

According to Statistics Korea on Wednesday, May was the second month in a row in which consumer prices rose more than 2 percent. In April, they rose 2.3 percent.

May's increase was the briskest since April 2012, when prices rose at the same rate.

Consumer prices have been rising since the beginning of this year, in contrast to last year, when monthly rates of increase were mostly below 1 percent.

The biggest contributor was a surge in petroleum prices.

Petroleum prices were up 23 percent in May compared to a year earlier. That was the fastest increase since August 2008's 27.8 percent.

“Petroleum prices saw a sharp increase due to the base effect, reflecting the sharp fall in international crude prices last year,” said Eo Woon-sun, a Statistics Korea’s official specializing in short-term economic statistics. “The growth in petroleum prices was the major contributor to last month’s inflation.”

Agriculture prices were up 16.6 percent and livestock price 10.2 percent.

The prices of some agricultural products more than doubled.

Leek prices surged 130.5 percent -- down from March’s 305.8 percent and April’s 270 percent, but still a concern for shoppers in the produce aisle.

Egg prices rose 45.4 percent due to a drop in egg production caused by avian flu.

Prices of services rose 2.5 percent, the sharpest since February 2019, when they also rose at 2.5 percent.

International crude prices have been growing on expectations of some kind of global economic recovery, however uneven.

Compared to the beginning of this year, international crude prices have risen more than 30 percent.

As prices rise, the possibility grows of central banks rolling back policies implemented during the Covid-19 pandemic.

While the Bank of Korea (BOK) kept the key interest rate at the historic-low of 0.5 percent last month, its governor hinted at the possibility of normalizing monetary policy in the second half of the year.

“We concluded we need to take some more time to monitor the pace of economic recovery,” BOK Gov. Lee Ju-yeol said at a press conference held after a monetary policy committee meeting on May 27. “Whether we will raise rates this year really depends on the pace of the economic recovery.”

Lee said the central bank will not rush a decision, adding, “At the same time, we are considering the risks of massive side effects if we are late.”

Statistics Korea projected that consumer prices will continue to rise this month, before easing in the second half of the year, a sentiment shared by Finance Minister Hong Nam-ki.

“The recent rise in consumer prices is led by the base effect and a temporary supply shock,” Hong said on Wednesday via Facebook. “The situation will gradually resolve as we head into the second half.”

He  noted that international crude prices and petroleum prices in May 2020 fell 18.7 percent year-on-year due to the shock caused by Covid-19.

“As a result, consumer price declined 0.3 percent, the lowest in a year, [in May 2020],” Hong noted. “If you compared [May's prices] to the previous month, which does not factor in the base effect, consumer priceS rose 0.1 percent, indicating that inflation is stabilizing.”

Some analysts argued that the latest figures may not have a major impact on monetary policy as the momentum for inflation may not last.

“Due to the base effect, consumer prices could continue to exceed 2 percent until the third quarter," said Kim Yoo-mi, an economist at Kiwoom Securities. “However, as the base rate effect will weaken after September, it’s difficult for this level of inflation to continue.

“As a result, the influence of inflation on monetary policy will likely be limited,” Kim said.