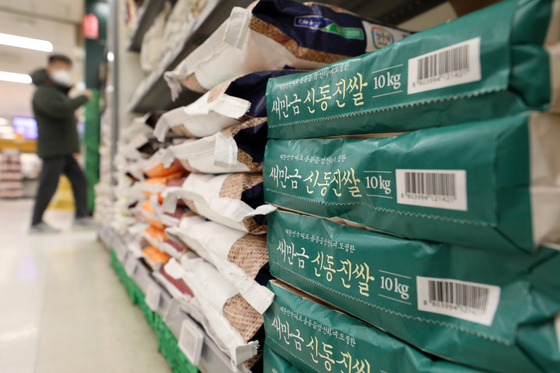 Packages of rice are displayed at a supermarket in Seoul. [NEWS!]

Goodbye to all that. The rising price of rice is going to start hitting restaurant patrons in the pocketbook.

Mrs. Yang, who runs a restaurant in Dong District, Ilsan, Gyeonggi, was advised to increase the price of a bottle of makgeolli to 4,000 won after the wholesale price went from 1,000 won to 1,300 won.

“Even if I want to maintain the menu price, it is impossible because of relations with nearby restaurants,” Yang said.

The price change could affect the image of makgeolli as a cheap and cheerful drink.

“I am having makgeolli after a long time, but its price went from 3,000 won to 4,000 won, which is a 33 percent increase,” said Im Seok-young, a 52-year old man who ordered the drink recently at a restaurant in Seodaemun District, western Seoul. 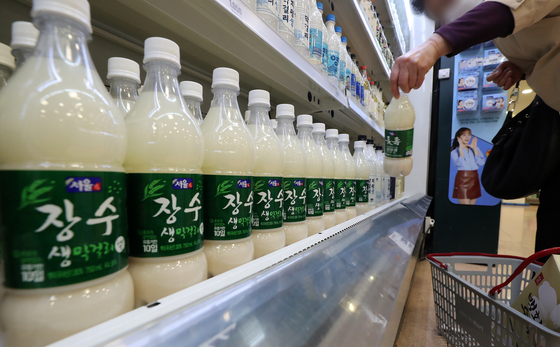 Bottles of makgeolli are displayed at a Seoul spermarket. [NEWS1]


Jangsoo Makgeolli, which has a market share of about 50 percent, decided to increase the factory price of the product by 120 won last month. The factory price refers to the initial price quoted for pickup at the gate of a factory before being shipped to wholesalers and retail shops. A hike in the factory price cascades through the supply chain.

A bottle of makgeolli is now selling for 1,600 won at convenience stores, up 23 percent from a very familiar 1,300 won.

“We changed the price for the first time in 15 years following the soaring costs of packaging and logistics as well as soaring prices of rice,” said a spokesperson for Seoul Jangsoo, a producer of makgeolli.

Other manufacturers of the milky drink followed suit.

Not all producers have raised prices.

“We are constantly monitoring market conditions, but no decision has been made about price increase,” said a source at Kooksoondang, which makes Kooksoondang Makgeolli.

But one industry insider believed more hikes are inevitable.

“The cost of the basic ingredient [rice] jumped significantly, so they can’t bear the burden without hiking the price,” the source said.

The average export price for 1 ton of rice produced in Thailand, Vietnam and India rose 29 percent to $473 in March from $368 in the same month in 2019, according to a report released by Korea Rural Economic Institute.

Shipping costs are also on the rise.

The Shanghai Containerized Freight Index, a widely used index for sea freight rate, hit 3,100.74 at the end of last month, up 120.98 points or 4.06 percent from the previous week and the highest level since October 2009. When compared to last April, it jumped by more than 2,200 points, or 244 percent.

“Imported rice accounts for 17 to 18 percent of the rice used by local makgeolli producers,” said an official at the Korean Makgeolli Association.

In Korea, the average retail price for 20 kilograms of rice between January and April stood at 60,080 won, up 12 percent from last year’s average of 53,638 won.

The wholesale price was 58,700 won, up 38 percent from the previous year.
The spike is attributed to a poor harvest caused by a longer-than-expected rainy season and typhoons.

The total yield of rice in Korea was 3.5 million tons last year, down 12.6 percent compared to an average year. That figure was the lowest since 1968, when Korea was still poor.

To stabilize prices, the government has released 370,000 tons of rice it reserved for emergencies.

The rise in rice prices has prompted some restaurant owners to raise the price of a bowl of rice by 500 won, although not all.
“We’ve seen fewer people visiting the restaurant because of the pandemic,” said Mr. Kim, who operates a restaurant in Seodaemun District.
“I’m worried that a rice price increase could turn away people,” Kim said.

Producers of instant rice products have been less hesitant.

CJ CheilJedang raised the price of its Hetban microwavable rice by 6.25 percent and Ottogi increased its by 7 percent.

“We face a spike in the price of ingredients and tough business conditions in the wake of the pandemic,” said a restaurant owner in Jongno District, central Seoul.

“A 500 won increase could be considered modest, but for customers it could come off as a big change,” he said.