“Yoon So-yeon, shall we start learning Korean together?”

The voice of BTS's V welcomed this reporter to the “Learn! Korean with TinyTAN” Korean learning kit via the “MotiPen,” which was just one of the items included. To summarize, even a native Korean speaker should buy the kit if they want to feel closer to BTS.

“Learn! Korean with TinyTAN” is a Korean language education package developed by HYBE’s subsidiary HYBE Edu to help non-Korean speakers learn the language. The package consists of a “Student Book,” “Workbook,” the MotiPen, a set of vocabulary cards, a set of alphabet cards, two rolls of patterned tape and a pack of stickers including the Korean alphabet and the TinyTAN characters. TinyTAN is the name of the 3-D animated characters developed by Big Hit Entertainment, the previous name of HYBE.

The book is for beginners and starts with the Korean alphabet known as hangul — written as Hangeul in the book — and its components. Recordings of the contents of the book can be heard from the MotiPen when it touches on different parts of the books so learners can hear the exact pronunciations. The pen offers four languages: Korean, English, Japanese and Spanish. HYBE Edu said they may be adding more languages depending on the demand. 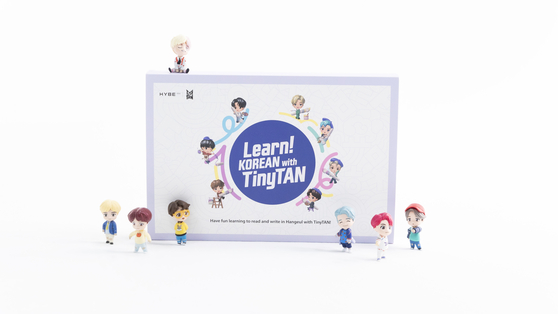 “Learn! Korean with TinyTAN” is the second version of HYBE’s Korean language learning package, and comes nine months after the first version “Learn! Korean with BTS” was released last year in August. Over 300,000 kits were sold in 30 different countries and it was chosen as learning material for Korean language courses in schools including The University of Sheffield and Middlebury College. HYBE Edu surveyed users and found 78 percent were satisfied with the kits, especially with the MotiPen.

The MotiPen is indeed the alpha and omega of the whole experience. It is a pen — intended to motivate learners, hence the name “moti” — that doesn’t write anything but is equipped with a sensor to detect sections in the book and read them aloud. The pen was also included in the previous version, but two special features have been added in the new edition so learners can feel like they are “actually learning Korean with BTS.”

Firstly, when the learner first receives the package, they get a purchase receipt card which allows them to log on to website where they can register their names and choose their favorite member of BTS to enjoy an audio personalization service. An artificial intelligence (AI) program that has learned the traits of each member's voice will read out your name as if it’s being read by the actual member.

The voice may be AI-generated but it sounds so real that even the most sensitive fan may not realize that it is a synthesized voice if not notified in advance. 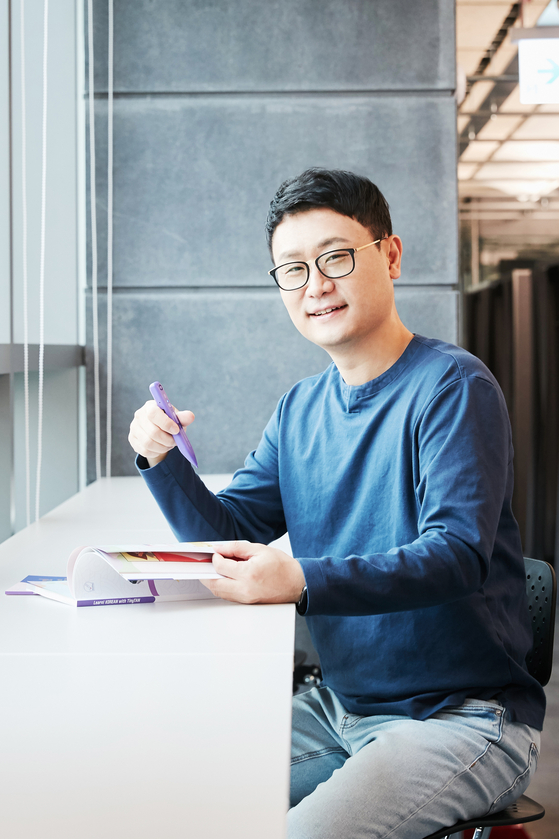 The AI also reads messages in BTS member’s voices to encourage learners to keep going. Both features are meant to offer a boost to learners and the reporter agrees that the features are so impressive, that even a native Korean speaker would feel like they've gotten their money's worth from the package.

“The ‘Learn! Korean with BTS’ and the new ‘Learn! Korean with TinyTAN’ was developed to help people around the world who want to learn more about K-pop and Korean culture but they can’t do so because of the language barrier,” said Choi Young-nam, the general manager of HYBE Edu. “Understanding the language helps them understand the music and the culture better and so we used our IP [intellectual property] and developed the technology to make the learning experience more enjoyable for people.”

QR codes within the book will lead the learners to online videos of BTS that are relevant to the learning experience. The package can be purchased from 99,000 won ($88) on the fan community app service Weverse Shop. For those who don't want the entire package, HYBE Edu offers a cheaper online version for 20,000 won that is mainly comprised of videos. Other related content will follow in the future according to HYBE Edu, but it did not elaborate on what it would be or when.