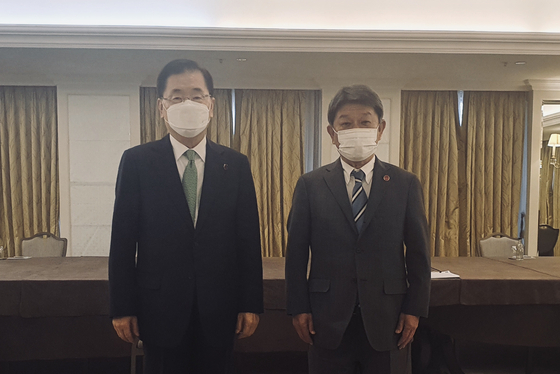 Korean Foreign Minister Chung Eui-yong and Japanese Foreign Minister Toshimitsu Motegi pose for a photo ahead of their first in-person talks in London Wednesday on the sidelines of a G7 meeting and immediately following a trilateral meeting with their U.S. counterpart, Antony Blinken. [FOREIGN MINISTRY]

But during a 20-minute meeting on the sidelines of a Group of Seven, or G7, ministerial meeting, Chung and Motegi were unable to resolve their differences over history issues stemming from Japan’s 1910-45 colonial rule over the Korea, particularly compensation for wartime forced laborers and sexual slavery victims.

Seoul’s Foreign Ministry of Foreign Affairs said in a statement that the two sides “agreed on the need for close cooperation between South Korea and Japan for peace and prosperity in Northeast Asia and the world, and to develop Korea-Japan relations in a future-oriented way.”

Motegi repeated Tokyo’s position on the issue of compensation of victims of Japanese wartime sexual slavery, euphemistically referred to as comfort women, and the Korean Supreme Court rulings on force labor victims, said the ministry.

The two sides however noted the close communication among Seoul, Washington and Tokyo on issues related to North Korea and its nuclear threat, and agreed to “continue to cooperate to bring substantive progress toward the complete denuclearization of the Korean Peninsula and the establishment of permanent peace in the future,” said the ministry.

Their bilateral talks came on the heels of a three-way meeting with U.S. Secretary of State Antony Blinken earlier that morning, the first time the top diplomats of the three countries met together in over a year.

It was Chung’s first encounter with Motegi since he took office as Seoul’s top diplomat in February.

A Korean Foreign Ministry official told reporters that after the trilateral talks, Chung and Motegi moved to another room within the same hotel after talks with Blinken for their bilateral talks.

“There was a good atmosphere during the conversation,” said the official, adding “it was an opportunity to start earnest communication between the two countries.”

The official said that Chung said that he would “strengthen communication” on various issues in the future, and that Motegi agreed.

Chung, a former national security adviser to President Moon Jae-in, indicated that he was always willing to meet with his Japanese counterpart. However, Chung had yet to hold a phone conversation with Motegi since he became foreign minister. Motegi has served as Japan’s foreign minister since September 2019 under the preceding Shinzo Abe administration.

Japan’s Kyodo News Agency reported that Motegi in talks with Chung asked the Korean side to provide an acceptable solution to the forced laborer compensation issue, repeating Japan's protest of the 2019 Korean Supreme Court decisions ordering Japanese companies to compensate the victims.

Washington has pushed for stronger trilateral cooperation with U.S. allies amid concerns over North Korean provocations and China’s rising assertiveness in the Indo-Pacific region.

The trilateral talks were a chance for the diplomats to discuss bringing North Korea to denuclearization negotiatons.

The envoys also reaffirmed the importance of Seoul-Washington-Tokyo cooperation and agreed to continue to seek “reciprocal, future-oriented cooperation to promote peace, security and prosperity in the region,” said the Korean Foreign Ministry.

In March, Blinken and U.S. Defense Minister Lloyd Austin made a joint visit to Seoul and Tokyo.

South Korea was invited as a guest — along with Australia, India, South Africa and Brunei — to the G7 foreign and development ministers' talks, which run through Wednesday, and Chung flew to London Sunday. Moon is also invited to the three-day G7 summit to be held in Cornwall from June 11 to 13.