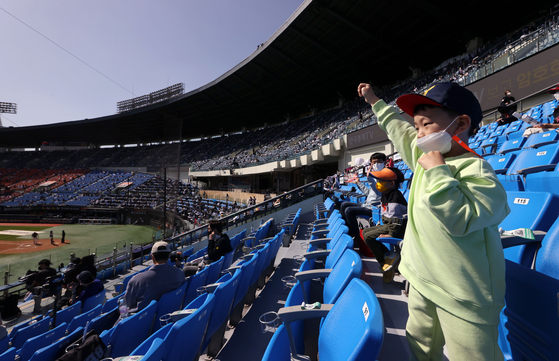 A young fan cheers on the LG Twins as they take on the Doosan Bears in the Jamsil derby at Jamsil Baseball Stadium in southern Seoul on Children's Day. [YONHAP]


The KBO put on a show for Children's Day on Wednesday, as cartoon characters and Disney princesses combined with great weather and a lot of runs for what is traditionally one of the biggest days in the KBO calendar.

Children's Day festivities were slightly subdued this year as Covid-19 social distancing rules limited stadium capacity to 10 percent and prevented teams from holding too many games before the first pitch. Despite the limitations, all 10 teams embraced the opportunity to celebrate something — and both the NC Dinos and Lotte Giants did so in style.

The Dinos partnered with Smart Study and took its Baby Shark characters for a ride around the bases in the game against the SSG Landers at Changwon NC Park in Changwon, South Gyeongsang. The Dinos wore a bright blue jersey covered in images of Baby Shark, with the cartoon character also invited to throw out the first pitch at the game.

The Giants went a little more old school with their cartoon collaboration, sporting a Smurf-themed jersey complete with the Giants logo written in the Smurf font with a Smurf peeking over the top and a Smurf patch on the arm.

While neither the Doosan Bears or the LG Twins had a special Children's Day jersey as they faced off in the Jamsil derby, their cheerleaders did. The four Doosan cheerleaders appeared dressed as Disney princess characters throughout the game.

Every team held events on the sidelines of the games, including free giveaways, photo zones, inflatable play zones and opportunities for children to access the field before or after the game. First pitches were all thrown either by popular cartoon characters or children who are fans of the team.

This year's festivities, though paired back, mark a return to the Children's Day celebrations of old. Last year the postponed KBO season actually began on Children's Day, but fans were not allowed inside stadiums and rain showers limited play.

On the field, it was a good day for the Kiwoom Heroes. Despite struggling this season and entering the game at ninth in the standings, the Heroes were able to put together a big 14-0 win over the KT Wiz at Gocheok Sky Dome in western Seoul, with Kim Woong-bin bringing home five RBIs off of three home runs.


The Twins beat the Bears 7-4 in the Jamsil derby, while a little Smurf help didn't work for the Giants, who lost 8-5 to the Kia Tigers in Busan. The first-place Samsung Lions continued their streak, beating the Hanwha Eagles 4-1 in Daejeon.

The Giants and the Landers had a close fought game that saw the two teams still tied at 7-7 in the sixth as the other teams headed home after more than three hours of play.

The Landers got things started with two runs in the first, only for the Dinos to respond with seven in the second. The Landers chipped away at that league with runs in the third, fourth and fifth to tie the score, and then the fight really began.

After a quiet six and seventh, the Landers exploded in the eighth with a grand slam from outfielder Jung Eui-yoon to give the Incheon club an 11-7 lead. The Dinos took two back at the bottom of the eighth, but the Landers canceled that out with two more at the top of the ninth.

NC were able to score three at the bottom of the ninth, but the Landers still walked away with the 13-12 win on the road.

The Children's Day games followed an unusual two-day break for the KBO. As well as the usual rest day on Monday, all KBO games were canceled on Tuesday so that potential Olympic team players that were vaccinated on Monday had time to recover. Some players, like the Dinos' Yang Eui-ji, also sat out Wednesday's games.

The KBO will return as normal on Thursday, but any players that are feeling unwell after being vaccinated can sit out games without having to follow the normal injured list procedure.