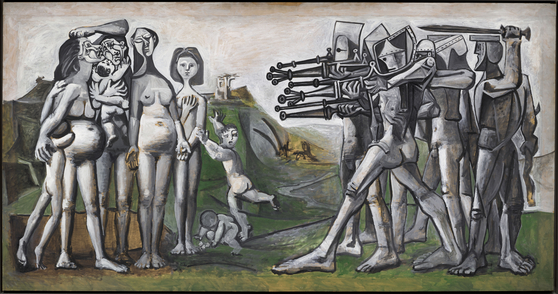 The painting is now on view at the Hangaram Art Museum in the Seoul Arts Center in southern Seoul, as part of a retrospective titled “Picasso, Into the Myth” which kicked off Saturday. The exhibition features 110 paintings, sculptures, ceramics and drawings by the artist on loan from Musée Picasso Paris in France. Among the highlights are “Man with a Mandolin”(1911), a painting in the signature style of the Analytic Cubism movement which Picasso led with artist George Braque, and the 1937 portrait painting of Marie-Thérèse Walter, one of Picasso’s major muses. 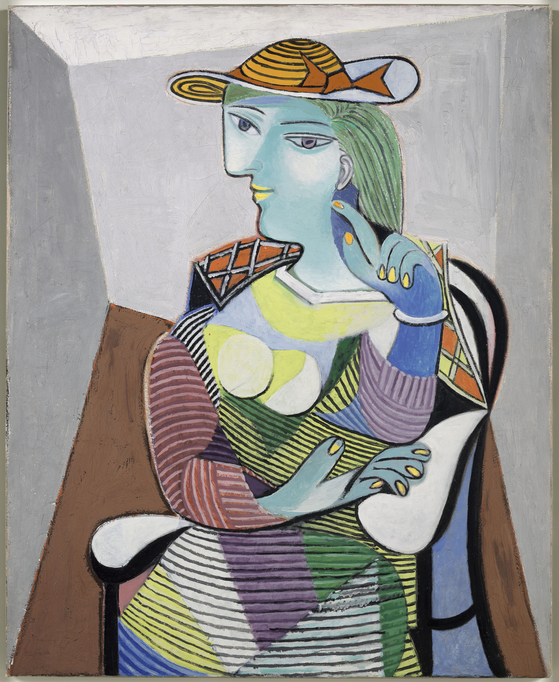 
Still, the focus of attention in this Korean exhibition is “Massacre in Korea.” In fact, it is not considered to be among Picasso’s best works in terms of aesthetics, but is never left out when the Spanish master is discussed in political contexts. “We received a few protest phone calls for exhibiting a ‘communist painting,’ “ said Jun Soo-mi, director of Vichae Art Museum, which operates the exhibition. “However it is just an anti-war, anti-violence painting.”

Picasso painted “Massacre in Korea” in 1951 during the Korean War after he joined the French Communist Party in 1944 and the party put the blame for the war on the United States, although it broke out when North Korea, supported by the Soviet Union, invaded South Korea.

According to art historian and former Seoul National University professor Jung Young-mok, who published several papers about the painting when Picasso unveiled it, “Both sides [the left and right wings] responded coldly [...] The French Communist Party was dissatisfied, saying that it is unclear who are the perpetrators of the massacre in this painting. [They had expected the perpetrators to be portrayed as U.S. soldiers.] On the other hand, the United States blamed the painting for being communist propaganda that accuses the United States of being the main culprit of the war.”

“Massacre in Korea” depicts the perpetrators and victims of war in a perfect dichotomy. The soldiers on the right side of the picture are all adult males, heavily armed with guns and swords and wearing armor and helmets, and are angular and mechanical in shape. On the other hand, the civilians on the left side are all women and children, and depicted naked to emphasize their innocence and helplessness. Soldiers aim both swords and guns at the women and children and outstretch their legs to show they are ruthless invaders and attackers.

Unlike this clear contrast, other elements are ambiguous. First of all, the background is not particularly Korean, and the faces of the victims are not particularly East Asian. In fact, Picasso had never been to Korea, and he seems to have little interest in its landscape. Even the soldiers' attire is a mix of ancient and medieval European warriors. The composition of “Massacre in Korea” was inspired by the Spanish master Francisco Goya(1746-1828)'s painting “May 3, 1808” and the French modern art pioneer Edouard Manet(1832-1883)’s “The Execution of Emperor Maximilian.”

Regarding many Americans’ anger about the painting, Picasso was quoted by the 1972 book “Picasso on Art: A Selection of Views” as saying, “To call up the face of war I have never thought of any particular trait, only that of monstrosity. Still less of the helmet or uniform of the American or any other army. I have nothing against the Americans. I am on the side of men, of all men.”

Still, the painting was virtually banned from being exhibited in the U.S. in the Cold War era until 1980. The painting was considered even more taboo in South Korea, which is technically still at war with North Korea.

“Picasso’s focus in this painting was an anti-war message,” said Seo Sounju, curator and commissioner of the exhibition. “The active involvement in the anti-war movement with art such as this painting and the masterpiece ‘Guernica’ [1937] is one of the two greatest achievements by Picasso, I think. The other is the pioneering of Cubism, which was the most revolutionary avant-garde movement of the 20th century.”

“Massacre in Korea” is in the exhibition’s sixth section titled “War and Peace, around Massacre en Corée.” The whole exhibition is divided into seven sections, which are arranged in roughly chronological order. Each section presents relatively well-known, if not the most famous, works by Picasso that reveal the ever-changing style of the versatile and prolific artist.


The first section “From Barcelona to Paris, Era of Revolution” shows Picasso’s early works. While there is no painting from Picasso’s so-called Blue Period or Rose Period, there are important Cubist works by the artist such as the painting “Man with a Mandolin” and the assemblage work “Guitar and Bass Bottle”(1913). Regarding the latter, Seo said, “The work, which shows well Picasso’s Synthetic Cubism that came next to his Analytical Cubism, has the highest insurance valuation among those on exhibit — about 80 billion won [$71 million].” 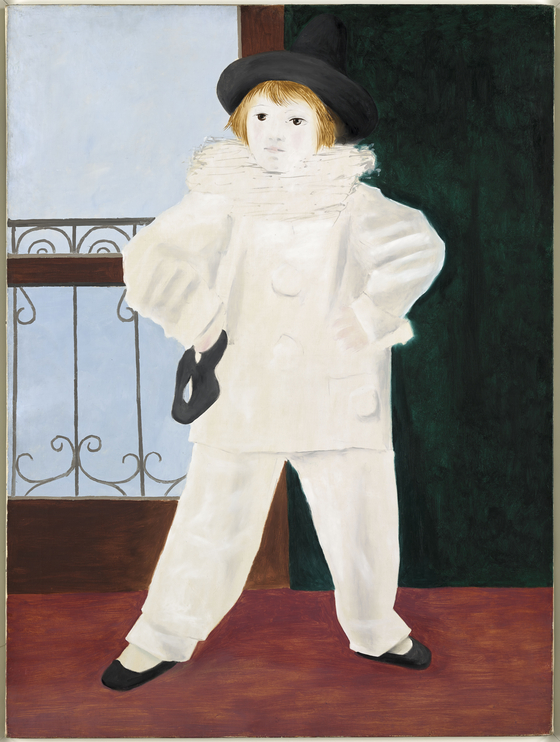 
The second section, titled “Return to Order, Classicism and Surrealism,” includes “Paul as a Pierrot”(1925), which depicts in neoclassical style his young son by his first wife and ballet dancer Olga Khokhlova, and “Sleeper”(1927), a painting that depicts in Surrealist style the face of a sleeping women presumed to be Marie-Thérèse Walter, with whom Picasso had an affair while still married to Khokhlova. 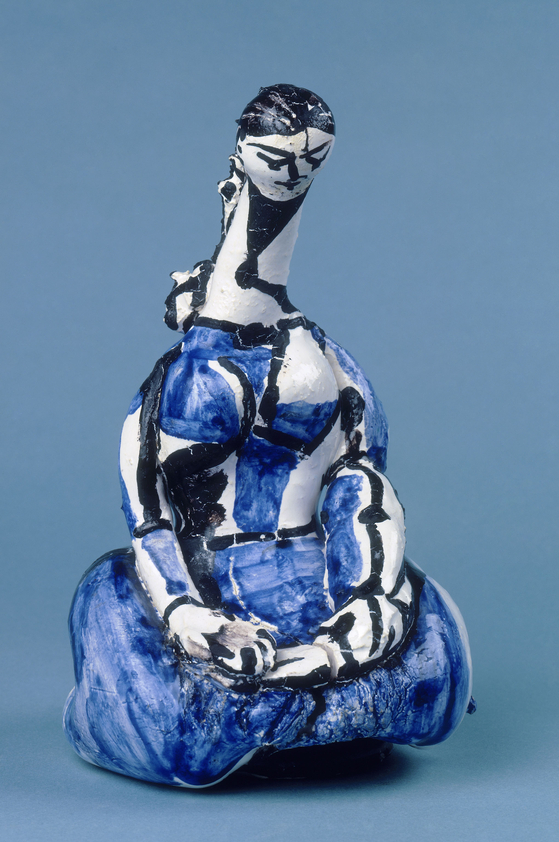 
The third section “Suite Vollard” features a set of 100 etchings, which Picasso produced in the 1930s in his neoclassical style and themes at the request of the famous art dealer Ambroise Vollard. The fourth section “New Perspective, Ceramics” presents the artist’s experiments with ceramic art after he settled in Vallauris, southeastern France, well known for its ceramic production.

The fifth section “Picasso and Women” features portraits of lovers of Picasso, who was a notorious womanizer and constantly sought out women as a source of inspiration. Among them is “Portrait of Marie Thérèse”(1937) and “Bust of a Woman in a Blue Hat”(1944), which depicts Dora Maar, a prominent Surrealist photographer who became Picasso's next lover and muse after Walter. There is also the painting “The Shadow”(1953), which is known as Picasso's self-portrait as a shadow experiencing loss after his much younger partner and painter Françoise Gilot, who was his main muse after Maar, left him due to his continued affairs with other women. 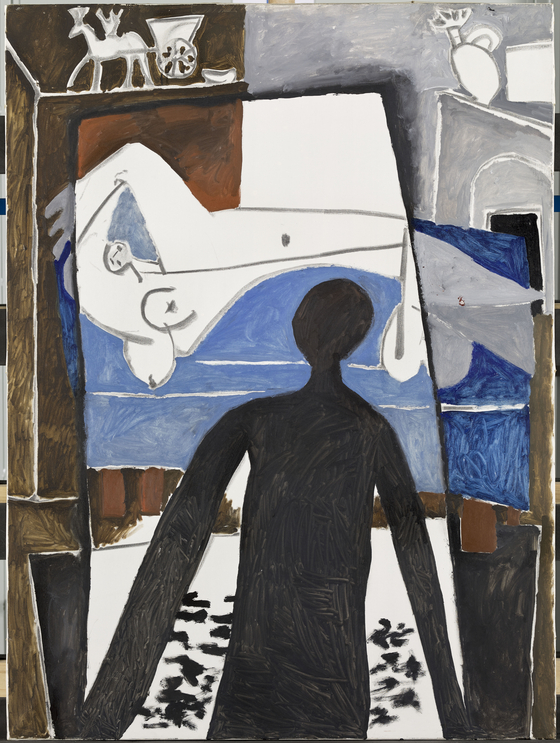