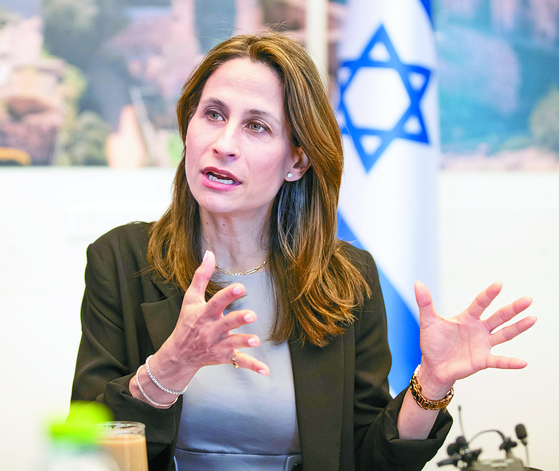 Israel's Tourism Minister Orit Farkash-Hacohen speaks during an interview with the JoongAng Ilbo on May 3 at the ministry's office in Jerusalem. With over half of the population fully vaccinated, Israel will start allowing limited entry of vaccinated tourist groups from May 23. [LIM HYUN-DONG]


Israel will reopen its sky road to some vaccinated foreign tour groups under a phased approach starting May 23, after closing its borders for over one year since the start of the pandemic.

After a record 4.5 million tourists visited the Holy Land in 2019, including around 60,000 Koreans, Israel experienced an 80 percent decrease of tourists as the coronavirus struck the country, Israel's Tourism Ministry said.

Israel’s decision to reopen its air gates reflects the country's confidence in its safety secured through its active vaccination campaign.

According to Our World in Data, 62.61 percent of Israel's population received at least one dose of a Covid-19 vaccine as of Friday, May 7, a proportion higher than that of any other country in the world.

In the initial phase of the pilot plan, Israel will allow a maximum of 20 tour groups of up to 30 people each who have all been fully vaccinated. Group entry will be expanded at a later stage after determining the risk of infection, and individual travelers will eventually be let in from July.

Israel’s Tourism Minister Orit Farkash-Hacohen sat down for an interview with the JoongAng Ilbo at the Ministry of Tourism in Jerusalem on May 3 to discuss the country's plans for resuming tourism.


Q. What is Israel’s plan to accept foreign tourists?

A. The first stage will start on the 23rd of May with no more than 20 tourist groups [that are] vaccinated.

We will start with a limited group of countries which are in a healthy condition that we will be less worried about.

After about three weeks, we will expand this pilot plan to see how it works and how the airlines are working. After that we will expand it to an unlimited amount of tourist groups.

Later on, around in July, we will then [allow] individual tourists.

In my view, Israel needs to exploit this opportunity of it being a healthy destination during this [coronavirus] crisis, and to earnestly benefit off the economy. But we’ll see how things go.


After arriving in Israel, will tourists have to undergo a 14-day quarantine?

Tourists will have to take a polymerase chain reaction [PCR] test before going on the plane, and an additional serologic examination for virus variants once they land in Israel.

[Once the results come out after a day] in a hotel, they can start their tours as planned.


Was there any friction with the Health Ministry while making the new decision?

The Health Ministry in Israel is very strict, and everything that we have achieved in the tourism industry was [through] a very tough attitude.

And I would humbly say, I think I was right in every argument that I took up with them because the Covid-19 issue is a balance between economy and health. When you have a safe place like Israel, it is a shame not to use this condition to start healing the economy and giving people back their jobs.

We are starting with the pilot program of [receiving tourist groups first] because the Health Ministry wanted that to be the case.

The Ministry of Health is always looking for [ways to make an] easy life and for zero risk managing.

But I think that this program is very strict. I don’t know any other country that starts [accepting tourists] only by groups and [expands] from there. So this is good enough, and it is very clever and very balanced.


How big was the loss in tourism due to Covid-19?

Unfortunately last year, we anticipated an 80 percent crash in the amount of tourists — meaning we had [a big drop in] tourism and I think only a few hundred thousand tourists came to Israel.

Israel is one of the safest places to visit, not only because it is beautiful or we have thousands of places of historical and religious places, but because we are safe — and we invite everybody to come in.


When will Korean tourist groups be allowed to visit Israel?

As a minister of tourism, I’m looking forward to seeing more Korean tourists in Israel in the long future.

At the moment, what I hear is that Korea needs to establish a more vaccinated population.

But we see great importance in increasing and bringing over more Korean tourists to Israel.

We think that Israel is the perfect place for Korean tourists. For example, for pilgrims, we are the cradle of Christianity, and I think that there are no other countries like Israel, the Holy Land, that can offer such a meaningful trip to Korea’s Christian believers.

Once Korea is more vaccinated, we will be more than happy to see more and more tourists coming over.

I believe in the first three weeks [from May 23], we will allow a limited list of countries that the Health Ministry will decide upon, and after, there will be an option to widen the amount of countries [to possibly include Korea] in about July.


How did Israel open domestic tourism for Israelis?

Like in all over the world, tourism was the industry that was damaged the most in Israel.

During the pandemic, I tried working and keeping the oxygen in the tourism industry and did a few initiatives.

Secondly, I initiated a subsidy program for tour guides in Israel who were heavily damaged by not having groups of tourists. I designated a budget for them and they were paid by the Ministry of Tourism to run free tours to Israelis around the country during the pandemic.

The most interesting thing I think we did with the Ministry of Health was we created two “Green Islands” — a green, Covid-free zone for the southern touristic city Eilat and the Dead Sea area — in order to give oxygen to the two cities which consist of over 70 percent of the domestic tourism of Israel.

We gave a budget, and only people who took the PCR tests were allowed to come in and out.

It was a way to help cities and locations that were heavily dependent on domestic tourism from going bankrupt and basically from deteriorating financially.

There were also questions [to help] Eilat, which had over 50 percent unemployment because of the closure, as it is a city fully dependent on tourists.


Were quarantine measures applied well in the Green Islands?

The Green Island tourism in Israel went terrific — above and beyond our expectations.

We put barriers around these areas, and we had to check every Israeli that came and see the voucher of the vacation. We also had to check the negative PCR results, and [make sure] that they are not forged through monitoring by technological applications.

[In addition,] hotel employees had to go through a PCR test every 24 hours, much more than the tourists.

I think it was one of the few, creative ways for the government to address the pandemic, and I think it was a great example of balance between health and economy.

The Ministry of Foreign Affairs is working very thoroughly to create these mutual agreements, in which different countries will be able to validate each other's vaccinated people.

The Foreign Ministry signed an agreement with the state of Bahrain and is working with other countries. There are many other countries [working to make agreements], such Italy and the United Kingdom, but they haven’t signed yet.

There are so many obstacles, but for me as a minister of tourism, I think there is no reason why not to [accept] vaccinated tourists.