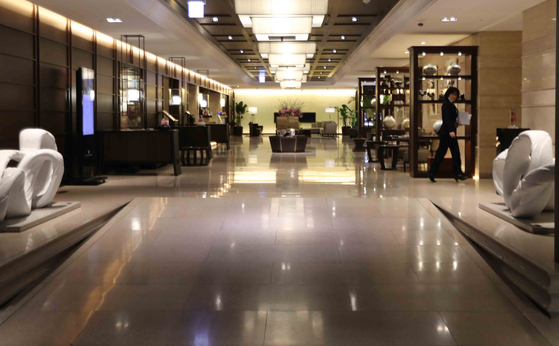 The empty lobby at the Seoul Royal Hotel in Myeong-dong. The number of visitors to hotels and amusement parks has dropped significantly since Covid-19 social-distancing restrictions were upped. [KIM SANG-SEON]

As the social distancing regulations tightened with the fourth Covid-19 wave, travel and leisure businesses are especially challenged.

The number of visitors to amusement parks and resorts in Seoul and in Gyeonggi dropped significantly over the first weekend since the government modified the social distancing regulations, and hotel visitor numbers have halved.

“Last weekend, the number of visitors was far lower than in spring 2020, when Covid-19 situation was at its worst,” said an official at Petite France. “Visitors were about 20 percent of pre-Covid-19 levels.”

The situation was similar at Nami Island in Chuncheon, Gwangwon. According to the resort, the number of visitors was roughly 30 percent compared to the previous week, and only 10 to 15 percent of what it was before the outbreak

Amusement parks, including Lotte World in Gangnam, said customer numbers dropped 65 percent compared to the previous week, while at Everland in Yongin, Gyeonggi, visitor numbers were down 40 percent.

“Visitor numbers when compared to pre-Covid-19 were down 70 percent last weekend,” said a Lotte World official. “We barely avoided the 80 percent decline suffered in summer 2020.”

Theme parks, such as the Korean Folk Village in Gyeonggi, have been closing early or reducing the number of special events, including parades.

Hotels in Seoul and neighboring Gyeonggi and Incheon suffered their worst weekend so far.

Paradise City, a luxury hotel in Yeongjong, Incheon, last week was only able to book 50 percent of its room, a significant drop from the 80 percent on the weekends earlier this month.


Cancellations are up 20 percent. 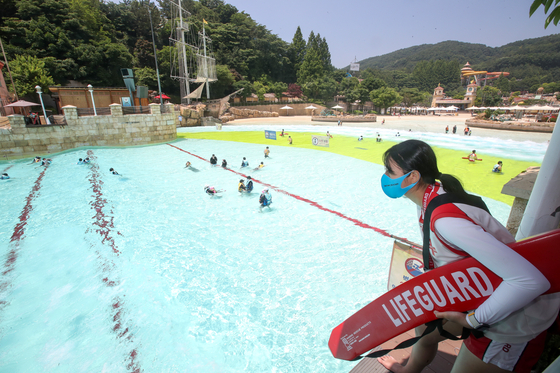 
The Grand Hyatt Hotel in Seoul had to suspend its kids package product, which has been available since July 5. The hotel said it plans to start offering the package again from July 30 if the government eases its social distancing regulations.

The Four Seasons Hotel and the Fairmont Ambassador in Seoul stopped its buffet dinner services to comply with the government’s social distancing regulations.

Except for its Nakwon Korean restaurant, Mayfield Hotel has either reduced business hours or entirely shut its restaurants.

“Hotels in Seoul are only allowed to operate at two-thirds occupancy, and we are not allowed to hold events, including birthday parties and corporate events,” said an official at Banyan Tree Club & Spa. “Most of the hotels in Seoul will likely experience a 60 percent drop in revenue in their restaurant and bars businesses.”

Hotels in Jeju, which has been booming as a result of limits on overseas travel, are also in an emergency state as Jeju’s local government has raised its own social distancing restrictions.

Under the Jeju government’s order, 75 percent occupancy is the limit, and gatherings are limited to five people, a significant drop from previous regulations that allowed up to eight people to gather.

Since the local government raised its restrictions, hotels have been receiving cancellations.

“We were all booked until August,” said an official of a major hotel in Seogwipo, Jeju. “But in just couple of days, 600 reservations have all been canceled.”

An official at Glad Hotel in Jeju said the hotel even received a call from a bride who was crying while cancelling her wedding.