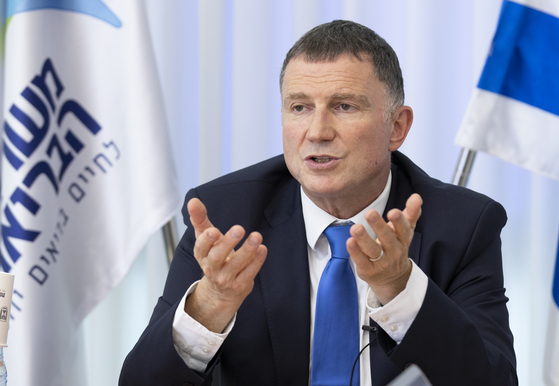 Israel's Health Minister Yuli Edelstein speaks during an interview with the JoongAng Ilbo on April 27 at the ministry's office in Tel Aviv. With over half of the population fully vaccinated, the minister announced on April 15 that masks would no longer be required in public outdoor spaces. [LIM HYUN-DONG]


After suffering from a severe third wave of Covid-19 infections, Israel became the first country to declare victory against the coronavirus, saying its citizens will no longer be required to wear masks outdoors from April 18.

Over half of the population is fully inoculated against the virus, and the records are showing that the daily new cases and number of serious cases dropped from a peak of 10,000 in January to around 100 in recent days.

It is known that Israel’s active purchase of vaccines was the key to its success.

Regarding the secret to procuring vaccine supplies that could inoculate its entire population of 9.3 million almost three to four times over, Israel’s Health Minister Yuli Edelstein cited "putting the eggs in different baskets" and "pre-purchase betting even when risked to lose money."

At the government's first vaccine meeting in April last year, Edelstein gave a few guidelines, one of which was "to remember that we are a very small market of 9 million people," said Edelstein. "So I told them, the moment that any company has an actual vaccine, they wouldn't even look in our direction."

The country’s officials led by Prime Minister Benjamin Netanyahu and the intelligence agency Mossad gave it their all in procuring the vaccines.

Edelstein, however, confessed that he did not know which of the four vaccine companies the country initially signed with — Pfizer, Moderna, AstraZeneca and Arcturus — would be approved by the Food and Drug Administration (FDA) for use, admitting that he did not expect Pfizer to be the first.

Israel has already signed a contract to purchase 15 million doses of vaccines of Pfizer and Moderna for next year.

Edelstein said that the country is "still seeking a vaccine with a different technology, to be on the safe side."

However, unlike during the earlier days of the pandemic, he said that the Israeli government is now demanding the vaccines to be procured at their later stages of development rather than pre-emptively because of the "expiration date" and "to cope with the virus variants."

Health Minister Yuli Edelstein sat down for an interview with the JoongAng Ilbo at the Health Ministry in Tel Aviv on April 27 to discuss the country's success story on vaccine procurement.


Q. What was the initial stage of Israel’s vaccine procurement?

A. We were lucky to have a very good professional team [organized in April 2020], and they started negotiating with different companies a year ago.

When I first saw their work, I said I have two rules for them — one, to remember that we are a very small market. We are 9 million people. So I told them, the moment that any company has an actual vaccine, they wouldn't even look in our direction. It's a free market — they would be interested in markets like 100 million people or 200 million people, [like] the United States, the European Union, but not Israel.

And the other thing, I said, was don't put all the eggs in one basket. We have to sign with every company to try to have different technologies. No one knows what's going to work in the end, no one knows which company will be the first in this race — and I do have to say that [the plan] definitely paid off in this situation.


Is that why Israel ordered the vaccines in advance?

I said we had to be in line, not to wait until the actual vaccine [is out]. We knew that we’re risking some money, but it was very important.

By the time that the vaccines went for FDA’s approval, we had agreements with four different companies, and no one [predicted] that Pfizer of all companies would be the first one [to be approved]. I do have to admit — no offense to Pfizer or to anyone else — that I was much more building on another vaccine.

[Pfizer and Moderna are the first products that utilized the 'mRNA' platform. This raised concerns about the safety and effectiveness in the early stages of development. Pfizer vaccines also need to be kept at an ultra-low temperature of minus 70 degrees Celsius, or minus 94 degrees Fahrenheit.]


Israel has recently signed an additional contract with Pfizer and Moderna.

In the case of Pfizer, we were the first country in the world to sign the agreements with them for 2022.

And we asked for supplies at the late-stage for two reasons — one is the expiration date. We don't want to find ourselves with vaccines that have expired.

This is our new situation, and I’m very glad that we have some feeling of safety for the for the next year.


There are suspicions that Israel gave personal medical data to Pfizer.


We never announced or leaked the negotiation before we actually signed the agreement with any company. [But] I had to publish this part of the agreement, commenting that it's illegal [to reveal citizens' data] and [that it] never happened in Israel. Everything that Pfizer knows, the Israeli can find on the official site of the health ministry or in our press conferences.


There must be countries coveting Israel's surplus vaccine.

We had a lot of incoming calls from different countries, but in the agreements, we’re not allowed to transfer the vaccines to a third party — mostly for legal reasons, not medical reasons. There is no exception.

It is even unpleasant because there are rumors in the press that we’re sitting on millions of vaccines and not doing anything, but the situation is we’re not, [and] we can’t sell or donate them with all the good desire.

In the case that we get permission from AstraZeneca to sell, we’ll be able to resell or donate whatever the case will be.


Clinical trials are under way for people aged 12 to 15, how are they going?

We have nearly 3 million people under the age of 16.

I’m not sure if we can seriously talk about herd immunity before we get the permission to vaccinate people aged 12 to 15. If we get good results there, we’ll be able to say, with a sigh of relief, we reached herd immunity.

I'm not sure if we’ll run an aggressive campaign to vaccinate young children.


How would you evaluate the health measures against Covid-19 in Israel?

We still have some restrictions, such as only one-third of the capacity [is allowed] at a stadium.

We've been open for a month, and we don't see any surging numbers, any outbursts of the disease or something like that, so we are going to cancel the ceiling in numbers so they can have full occupancy. We’re also going to have children [get tested] through a [polymerase chain reaction] PCR test so they will be able to enter theaters and stadiums.

The bad news is that we [keep] discovering a new virus variant now [like] the so-called Indian variant. We’re going to announce on the ban on Israelis traveling to India and countries where there is a high level of disease, Indian variants have been discovered and the vaccination is low. And those who are returning from those countries, even if they’re vaccinated, they will be obliged to go into quarantine.

I know that there are many Koreans, mostly Christian groups but also tourists who come and visit Israel, and we will be very happy [to welcome them] when we are able to resume tourism.