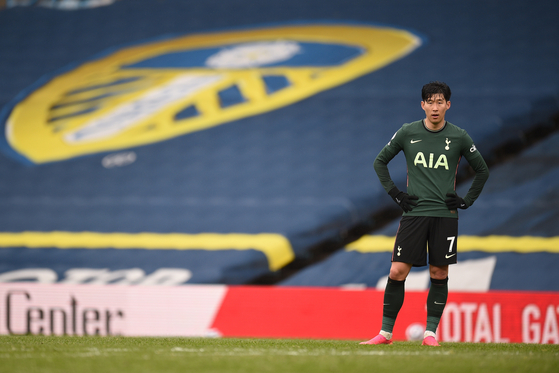 
An uninspiring performance from Tottenham Hotspur on Saturday effectively ended their Champions League dreams, but Son Heung-min was able to add one more to his personal season best.

Spurs lost 3-1 to Leeds United at Elland Road in Leeds, England on Saturday, an embarrassingly decisive defeat against the lower-ranked team that has pushed the London club down to seventh in the Premier League with just three games left to play.

Leeds were relentless from the moment the whistle blew. Their first goal came in the 13th minute, but they'd already had two attempts before that, dominating the exact same Spurs lineup that had triumphed over Sheffield United a week earlier.

Spurs' one and only goal came in the 25th minute, when a well-placed Dele Alli pass split the difference between two Leeds defenders and set Son lose in the box. The Korean forward didn't miss the chance, sending the ball into the bottom right corner to level the playing field at 1-1.

Yet despite Son's efforts, it was clear this was going to be the Leeds United show.

Leeds continued knocking on the door throughout the remainder of the half, finally breaking through to take the score to 2-1 in the 42nd minute. Spurs had one chance disallowed as offside, but otherwise remained quiet.

Spurs were ruled offside again at the start of the second half, and that was pretty much it for the visiting team in the second half. Harry Kane had a couple of opportunities but missed both, and Spurs could do little to stop the Leeds onslaught.

The home side finally added one more in the 84th minute to take the score to 3-1. Spurs weren't happy, claiming the goal was definitely offside, but VAR came out on Leeds' side.

With the loss, Spurs fell to seventh and their chance of finishing in the top four and earning a spot in the Champions League has all but disappeared. Spurs are seven points behind fourth-place Leicester City with three games to go, meaning it would now take Tottenham winning all three of their remaining games while Leicester, Liverpool and West Ham lose all of theirs.

With the goal, Son extended his personal best goalscoring season to 17 goals, three more than the 14 he scored in the 2016-17 season. Across all competitions, Son has scored 22 goals with 17 assists this season.

Spurs will be back in action against Wolverhampton Wanderers on May 16. They will then round off their season with games against Aston Villa on May 19 and Leicester on May 23.