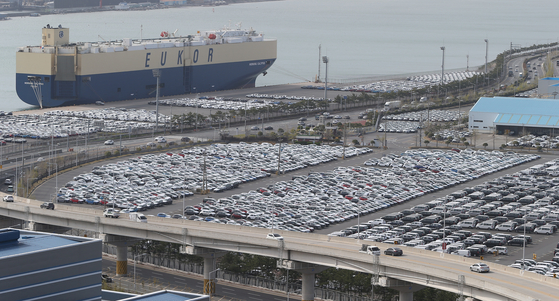 Automobiles for export at a dock in Ulsan on April 1. Car exports in the first 10 days of May surged more than 300 percent. [YONHAP]


Exports surged in the first 10 days of the month, rising by 81.2 percent on year to $12.5 billion, according to the Korea Customs Service on Tuesday.

Average daily exports in May rose 65 percent to $2.27 billion, which is $890 million more than the same period a year earlier.

If the trend holds to the end of the month, Korea’s exports will have grown for seven consecutive months.

“While this year’s export figure was relatively high because the same period last year performed poorly due to Covid-19,” Finance Minister Hong Nam-ki wrote in a post Tuesday. “major export items, including automobiles, petroleum products, semiconductors and new industry products, such as those related to biohealth and fuel cells, led the increase.”

Noting the strong performances of exports this year including April’s 41.1 percent year-on-year increase, which is the fastest growth in 10 years, and the accumulated exports in the first four months, which is a new record, the Finance Minister expressed confidence the momentum will continue in May.

“The government will do its best all-around in reinforcing exports so that it’s solid momentum, which is leading our economic rebound, will continue,” Hong said.

Automobile exports in the first 10 days of the month surged 358.4 percent while automotive parts exports were up 316.6 percent.

Exports to the United States rose 139.2 percent followed those to the EU, at 123.2 percent.

These are areas where there has been an increase in economic activity following mass inoculations for Covid-19.

Exports to China, Korea’s largest export market, rose 45.5 percent, and those to Japan were up 51.1 percent.

Imports increased with the fast recovery in the domestic economy.

The custom agency’s export report came a day after President Moon Jae-in set the goal for this year’s economic growth at 4 percent.

If that is achieved, it would be strongest growth since 2010, when the economy expanded 6.8 percent.

Some other institutions are predicting a 4-percent growth, such as the Korea Institute of Finance and LG Economic Research Institute.

“Exports up to April of the year hit a record high, and investments in equipment are increasing at a rapid pace. Consumer spending has revived, and economic sentiment has improved to pre-Covid levels,” Moon said. “All government capabilities will be mobilized, and private sector vitality will be improved so that our economy will grow more than 4 percent.”