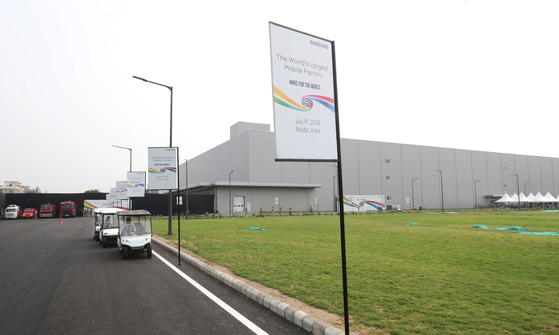 
Samsung Electronics and LG Electronics are being hurt by the coronavirus crisis in India as partial lockdowns affect their production lines there.

The Korean electronics makers could also see shrinking demand for electronic gadgets and home appliances in one of their biggest consumer electronics markets, as India suffers the world’s highest daily infection rates and death tolls from the pandemic.

“To minimize the spread of the pandemic, we closed the factory as a preventive measure, following a lockdown order from the city,” a spokesperson for LG Electronics said. A reopening date has not been decided and will depend on guidelines from the local government.

The plant produces televisions, refrigerators and air conditioners primarily for the Indian market.

India hasn’t called for a nationwide lockdown, and local governments have different levels of restrictions depending on the number of cases.

Samsung Electronics' smartphone factory in Noida has an annual capacity of around 100 million units, its second largest phone plant after one in Vietnam.

“Most employees work from home now due to the pandemic except for necessary workers,” said a spokesperson for Samsung Electronics.

Outside of Noida, LG Electronics has a manufacturing unit in Pune and Samsung operates a home appliance factory in Chennai. Those factories are running at a normal capacity, but with minimum workforces, according to the companies.

Both companies have allowed family members of Korean employees stationed in India to return to Korea as the daily case numbers continue to be perilously high.

India is the second largest smartphone market after the United States and has great growth potential, as less than half the population currently use smartphones.

Samsung has released over 20 new smartphones in India this year including the budget lines Galaxy M-series, Galaxy F-series and A series as well as the flagship Galaxy S21 series.

Analysts predict that the pandemic crisis could hurt sales in the near future.

“But these numbers should be taken with caution as a second and more virulent wave of Covid-19 is currently on in the country and is likely to impact the coming quarters. The consumer demand will take a hit due to the ongoing Covid-19 wave and subsequent lockdowns,” the analyst said.