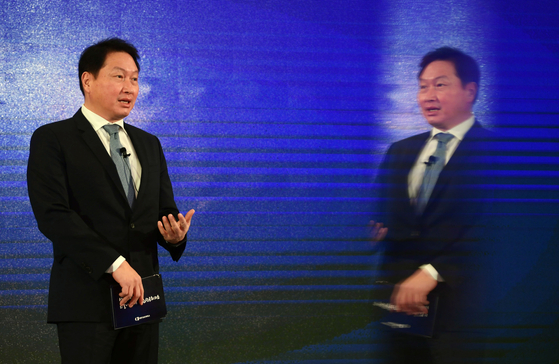 
A group of business executives will join a delegation headed to the United States for a meeting between President Moon Jae-in and U.S. President Joe Biden next week, according to industry sources and local media reports.

The meeting is scheduled for May 21.

SK Group Chairman Chey Tae-won will be in the delegation, along with SK Bioscience Ahn Jae-yong. From Samsung Electronics, either Vice Chairman Kim Ki-nam or CEO Choi Si-young, who heads the contract chip manufacturing business, will be joining, according to the reports.

“It is true that Chairman Chey Tae-won will head for the summit as he also doubles as Chairman at the Korea Chamber of Commerce and Industry,” a source with knowledge about the delegation said, though the other attendees were not confirmed.

The closely-watched meeting is expected to cover a wide range of issues, including relations with North Korea and global supply chain disruptions.

Some reports said that Samsung Electronics could use the event as a venue to announce its planned $17 billion investment in a chip production in Texas following the U.S. push to ramp up chip production inside the country.

The chipmaker has been invited to a second chip summit presided over by U.S. Commerce Secretary Gina Raimondo on May 20, a day before the Moon-Biden summit in Washington.