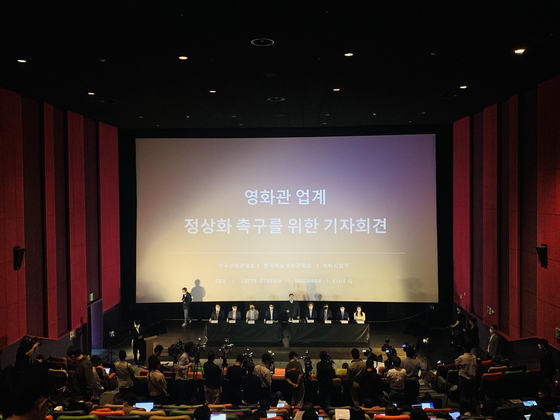 Representatives from the local film industry gathered at the Megabox Dongdaemun branch on Wednesday imploring government to come up with more active and practical ways to support the reeling industry. [KOREA THEATER ASSOCIATION]


Representatives from the Korea Theater Association, Korea Arthouse Association, and four multiplex theaters — CGV, Megabox, Lotte Cinema and Cine Q — implored the government to provide more financial aid to the reeling film industry amid the Covid-19 pandemic and relax restrictions imposed on theaters for the industry's normalization, citing that there have been no cases of secondary infections from theaters.

“We’ve been fervently hoping for a revival in our film industry this year, but the situation is worse than ever,” said Lee Chang-moo, president of the Korea Theater Association at a press event at the Megabox Dongdaemun branch on Wednesday. “Behind the glory of successively achieving Oscar trophies for two years, the number of theaters are dwindling and the lives of cinema enthusiasts are being destroyed.”

According to Korean Film Council (KFC) data, the annual number of audience members in 2020 dropped 74 percent compared to 2019 and recorded the lowest number since the organization began to compile data in 2004.

The representatives said that the film industry has been largely exempt from government aid because the multiplex theaters were managed by conglomerates, but the entire industry is on the brink of collapse due to the pandemic. They asked the government for more active and practical forms of support.

The demands that the representatives emphasized include the relaxation of restrictions on consuming food within theaters and making good use out of the cinema development fund that the KFC has been annually collecting from theaters nationwide since 2007. The fund is used to support sectors mainly in film production and investment. The fund collects three percent of profits made from ticket sales, amounting to some 50 billion won ($44.4 million) each year. Last year the fund decreased to 10 billion won due to the pandemic.

As of March this year, the balance of the fund is 105.3 billion won.

“The council announced that they will offer 7 billion won to support theaters this year, but the condition is that we need to contribute to last year’s fund in full,” said Im Heon-jung, CEO of the CGV Chilgok branch said. “But we don’t have the money to fully pay. The government needs to realize the direness of the situation and give back the fund that the theaters paid into over the last three years or at least make loans with low interest a possibility.

“Not all branches are backed up by conglomerates such as CGV, Lotte Cinema and Megabox,” he continued. “Thirty seven percent of branches are operated under contract but even they are facing barriers in receiving governmental aid as small-and-medium-sized enterprises. At this rate, local theaters will all disappear within a year or so.”

Kim Hyun-soo, the head director of Megabox, requested the government allow limited access to food and drinks within theaters based on social distancing measures.

“We’re not asking that the restrictions be completely abandoned," said Kim Hyun-soo, head director of the Megabox. “But due to excessive restrictions regarding drinks and food, theaters have been stigmatized as a facility one should avoid visiting. We ask the government to ease up on the prohibitions based on social distancing measures.”

Manufacturing was the engine of economic recovery