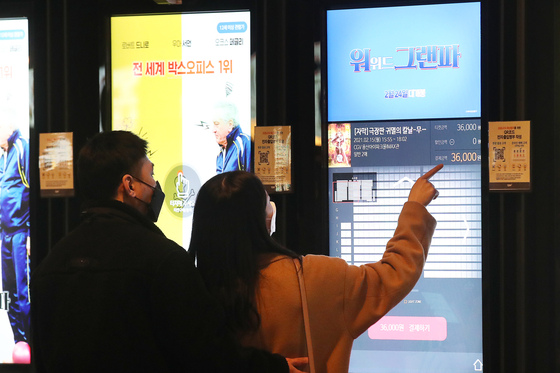 Moviegoers are buying tickets at the CGV Yongsan in central Seoul. [JOONGANG ILBO]


The film industry is urging the government to loosen the newly-announced social distancing measures for movie theaters, which have been on the verge of revitalization due to releases of long-anticipated Hollywood films.

New social distancing measures, which will be implemented from Saturday, say that all theaters must close by 10 p.m.

Marvel’s latest film “Spider-Man: No Way Home” drew some 635,000 audience members to theaters on its opening day on Wednesday, which is the highest number of moviegoers on the opening day of any film released in Korea since the beginning of the pandemic.

The running time of “Spider-Man” is 148 minutes, and if the operating hours of theaters are limited to closing at 10 p.m., the number of screenings on weekday evenings, which are popular among moviegoers, will be reduced.

Another highly anticipated film “The Matrix Resurrections,” which is slated for release on Dec. 22, runs for 147 minutes.

Film-related organizations such as the Producers Guild of Korea, Directors Guild of Korea, The Association of Korean Buyers & Distributors of Foreign Films in Korea, Screenwriters Guild of Korea and Korea Theater Association, jointly released an official statement Thursday asking the government to “make an exception considering the unquiet situation of the theater and film industry.”

“The damage caused by the Covid-19 pandemic over the last two years is growing uncontrollably,” the statement said. “The operating limits for movie theaters hinder new films from being released and will spread to the industry itself, ultimately leading to its collapse like a domino effect.

“Movie theaters have been actively pursuing preventive measures much stricter than what the government has required to provide a safe environment [for audiences to see the films],” it emphasized.

Due to the increase of daily infections, local films such as “Emergency Declaration” postponed its release and another film “Kingmaker,” which was scheduled for release on Dec. 29, is deliberating what to do after canceling press interviews with the actors after the press screening earlier this week.