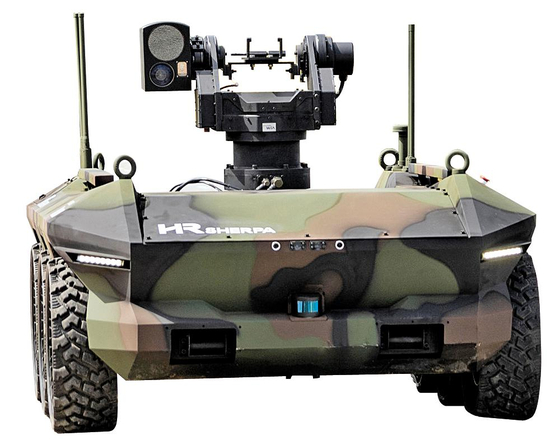 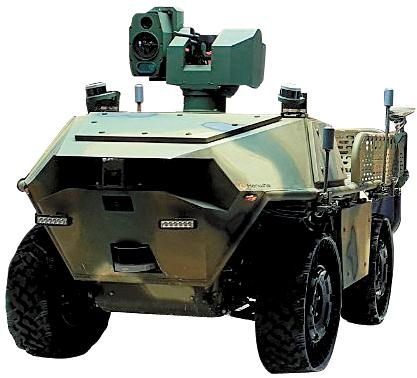 
“Unmanned” is the latest buzzword among the world's militaries, and Korean defense companies are wading deep into the race of developing remotely controlled and artificial intelligence-powered weapons both at home and abroad.

With the support of the Defense Acquisition Program Administration (DAPA), Hanwha Defense and Hyundai Rotem have developed advanced military hardware, such as optionally manned and unmanned fighting vehicles, to better brace for evolving future battle environments.

Under a rapid acquisition project worth 26 billion won ($22.8 million), DAPA in October decided to buy 12 military items that employ state-of-the-art technologies, such as remote control and autonomous driving powered by artificial intelligence. The agency launched the rapid acquisition project to accelerate the adoption of innovative technologies for military purposes.

Development of Hanwha’s Mpugv was completed in 2019 as part of a state project aimed at developing unmanned robotics to support infantry troops in different combat situations.

The 4x4 vehicle operates on electricity and has a maximum speed of 30 kilometers (17 miles) per hour on paved roads. Smaller than a light car, the 1.5-ton vehicle can be operated either remotely or autonomously to carry out various missions, such as surveillance, logistics transport, evacuation of casualties and combat engagement. It is also light enough to be mounted on a medium-sized military helicopter.

The vehicle has a payload capacity of 200 kilograms (440 pounds) and can conduct operations for 14 hours on a single charge.

Following field tests and evaluation of the Mpugv over the past two years in a program conducted by the Republic of Korea Army, the Korean Army notified the DAPA that Hanwha’s Mpugv qualified for further testing by the Army for pre-export verification trials, according to a March 31 press release by Hanwha,

The improved prototype of the Mpugv, which is expected to be unveiled in July, will be based on a six-wheeled platform that offers increased speed and distance on a single battery charge over its previous iteration.

Following DAPA’s specifications, the vehicle will be capable of traveling at road and cross-country speeds between 40 and 20 kilometers per hour, respectively.

Although serving similar purposes as Hanwha’s Mpugv, Hyundai Rotem’s HR-Sherpa, which has already been serving with the Army since 2016, also bears own its distinctive capabilities.

Smaller than a compact car, HR-Sherpa already has a six-wheel electric drive system and an operational weight of 1.98 tons including payload.

One of HR-Sherpa’s innovative technologies includes airless tire technology, which enhances the vehicle’s survivability in the event of wheel damage. HR-Sherpa is also capable of 360-degree rotation on its axis, a significant leap in maneuverability and operating efficiency over similar vehicles.

HR-Sherpa’s top speed is currently 30 kilometers per hour and can operate between six and 12 hours on a single charge, depending on the amount of movement demanded by the mission.

Hyundai Rotem’s product can also be configured for other missions including evacuating supplies and patients, supporting firepower and detecting dangerous substances.