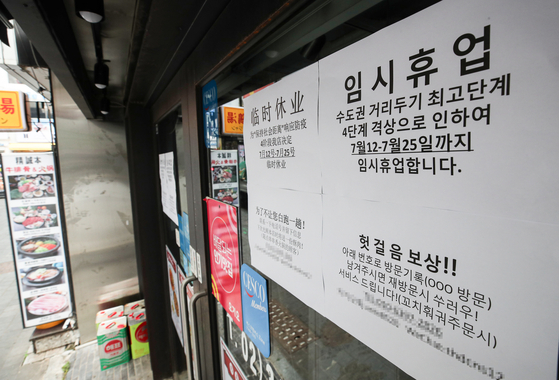 A sign on a restaurant in Myeongdong, one of the busiest areas of central Seoul, announces that it will be closed for two weeks as Seoul and its neighboring areas were put under the strictest social distancing Level 4. [YONHAP]


With Korea facing its worst wave of Covid-19 infections, appointments for Moderna vaccines were totally booked up in 15 hours and 30 minutes.

Around 3.52 million people were eligible, and the Moderna jabs will be administered from July 26 through Aug. 7 at clinics nationwide.

In just 15 hours and 30 minutes, all the reservations were taken.

"We temporarily suspended vaccine reservations for people aged 55 to 59 due to vaccine supply,” the Covid-19 Vaccination Task Force said Monday.

"We are planning to take additional reservations from July 19 from anyone who wasn't able to make a reservation," it added. Details will be announced this week.

At one point early Monday morning, the website froze as more than 800,000 people tried to log in, and the waiting time rose to 92 hours.


The recent spike in coronavirus cases has led to a manic demand for vaccines.

Many younger family members went online to book vaccines for  their parents or grandparents. On social media, they posted updates of their ordeals.

“A national war [has broken out] between filial sons and daughters,” read one. “It’s 4 a.m., and now I’m going to bed after reserving my mom’s vaccine,” read another.

Korea’s daily infections remained over 1,000 for six consecutive days as of Monday.

According to the Korea Disease Control and Prevention Agency (KDCA), Korea confirmed 1,110 new Covid-19 patients on Monday, the largest Monday figure since the start of the pandemic. There were 1,063 local infections, bringing the total caseload to 169,146.

Monday’s figure marks the first time daily infections rose over 1,000 for six days straight. Cases stayed over 1,000 for five days in a row at the peak of the third wave from Dec. 16 to 20.

The country added one more virus death, raising its total death toll to 2,044.

"Now is the biggest crisis since the coronavirus spread into the country,” President Moon Jae-in said Monday during an emergency Covid-19 response meeting at the Blue House.

The meeting included the mayors of Seoul and Incheon and the governor of Gyeonggi, the Prime Minister, the health and interior ministers as well as the head of the KDCA.

To fight the recent surge, Seoul and its surrounding areas have been placed under Level 4 — the highest in the four-tier distancing scheme — for two weeks starting Monday.

Under Level 4, only up to two people are allowed to meet in public after 6 p.m. All events are prohibited and schools are switched to online classes.

"This is the strongest measure that can be taken without putting in a full lockdown, and it is to overcome the situation swiftly in a short and forceful manner,” Moon said.

Calling the anti-virus measures as “K-Quarantine” — named after the global musical phenomenon K-pop — Moon added, “The core of K-Quarantine is mature civic awareness.” He urged the public to refrain from traveling and meeting.

"I am very sorry to ask the people once again to endure the situation a bit longer, and it is very heartbreaking when thinking of smaller business owners and self-employed people who will suffer losses again.”

New infections, which were centered on the greater Seoul area, are spreading rapidly to non-capital areas.

The number of people newly tested positive from non-capital regions rose to 288, or 27.1 percent, on Monday, accounting for more than 20 percent of the total cases for four consecutive days and almost reaching the 30 percent mark.

The southeastern port city Busan was put under Level 2 last Thursday, and added more measures after a day, such as limiting the number in gatherings to up to four after 6 p.m. and dialing back curfews for clubs and bars that allow dancing and noraebang from midnight to 10 p.m.

Daejeon is considering additional distancing measures, such as lowering the cap on private gatherings from the current eight to four people, after raising its social distancing level to Level 2 from last Thursday.

South Chungcheong, which lifted a ban on private gatherings from the start of July, will raise its social distancing level to Level 2 from Tuesday.

Jeju Island, Korea’s most popular holiday destination, raised its measures to Level 2 from Monday and put a curfew on clubs and bars that allow dancing of 10 p.m.