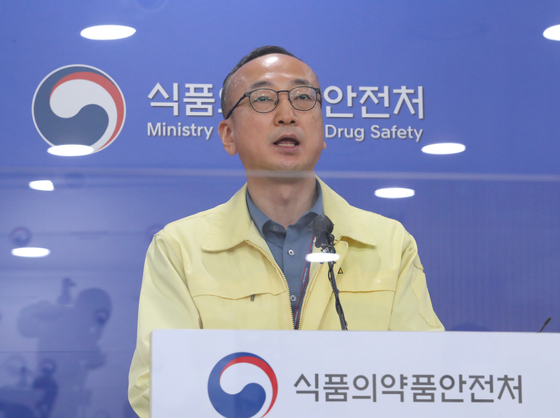 Kim Sang-bong, a senior officer in charge of new medicine at the Ministry of Food and Drug Safety, speaks at the ministry in Cheongju, North Chungcheong, on Monday. An advisory panel of experts said that the Covid-19 vaccine by U.S. pharmaceutical company Moderna Inc. showed more than a 94 percent efficacy rate and is eligible for use, according to Kim. [YONHAP]


U.S. pharmaceutical company Moderna’s Covid-19 vaccine passed the first of three stages of government review for use on Monday — moving a step closer to becoming the fourth company to have a vaccine approved in Korea following AstraZeneca, Pfizer and Johnson & Johnson.

An advisory panel of experts under the Ministry of Food and Drug Safety recommended approval of Moderna’s two-dose regimen after holding a meeting on Sunday, saying it showed around 94 percent efficacy in a U.S. phase 3 clinical trial.

The panel’s review is the first of three separate evaluations — first by an advisory panel of experts, next by pharmacists and a final comprehensive review — before the ministry gives final approval.

After reviewing the clinical trial that involved 28,207 participants, the panel advised the ministry to approve Moderna, saying it showed an efficacy rate of around 94.1 percent in preventing Covid-19, and more than 86 percent for people regardless of age or underlying conditions.

The experts detected cases of reactions during clinical trials, but symptoms were mild and disappeared in one or two days, the ministry said.

The results will be reviewed by an advisory panel of pharmacists on Thursday, and its recommendation will be announced that day.

Like Pfizer's, Moderna's is a messenger RNA (mRNA) vaccine, which induces immune response by injecting antigen genes into the body to create spike proteins.

However, mRNA vaccines require tricky ultra-cold storage, unlike the AstraZeneca vaccine which can be stored at refrigerator temperatures.

The government previously signed a contract with Moderna to bring in vaccines for 20 million people and they are scheduled to arrive before the end of June. GC Pharma will take charge of the import and distribution.

If approved, Moderna's jab will be the fourth vaccine to be administered following vaccines from AstraZeneca, Pfizer and Johnson & Johnson.

President Moon Jae-in declared more than 13 million people will have gotten first Covid-19 vaccine shots in the first half of this year in a special address to mark his fourth inauguration anniversary on Monday.

"The administering of the first dose to everyone in the population who is eligible will be completed by the end of September, ensuring that herd immunity is achieved before our original target of sometime in November," Moon added.

To encourage more people to get vaccinated, health authorities announced Monday that medical expense coverage will be expanded for people who suffer from Covid-19 vaccine side effects starting on May 17.

People who are hospitalized in intensive care units or suffer from illnesses to an equivalent degree but did not have proof of the condition being related to an inoculation will now be able to receive medical support.

If a causality between vaccination and abnormal reactions is proven later, compensation for damage will be made but excluding previous compensation.

Only two out of 156 severe health situations after vaccinations were concluded to have causal relations with Covid-19 vaccine inoculation, the Korea Disease Control and Prevention Agency (KDCA) said.

The case of a 45-year-old nursing assistant who was paralyzed in her four limbs after receiving AstraZeneca was not recognized, but she is expected to receive medical support under the new rules.

"Through this system, we will provide more support for patients with severe abnormalities who were not within the scope of compensation due to lack of causality, so that people can receive vaccine shots with relief," Korea’s Covid-19 vaccination Task Force team said. 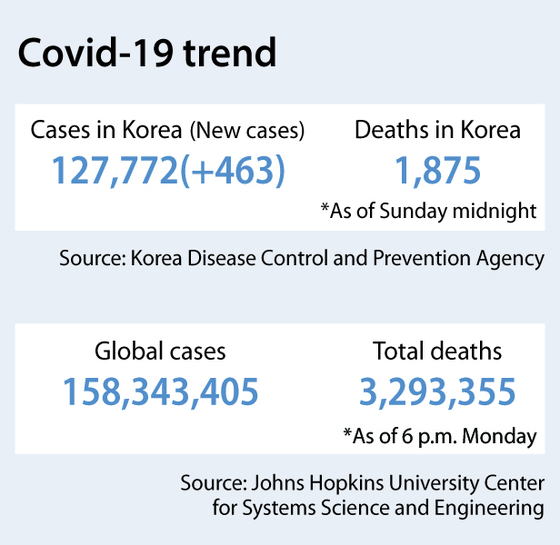 The number of cases fell back to the 400s after a week of higher numbers, likely due to fewer tests conducted over the weekend.

There was one more fatality, raising Korea's total death toll to 1,875.