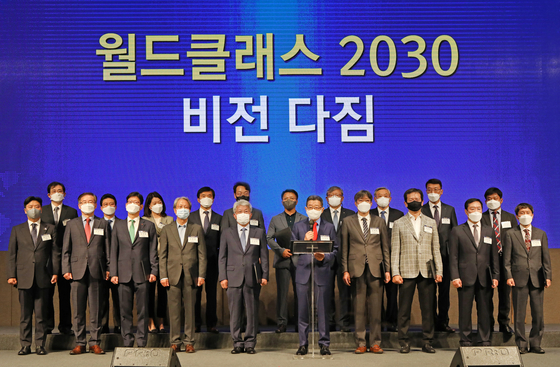 Oh Suk-song, chairman of Korea World Class Enterprise Organization, center, and representatives from 19 companies that have been selected for the second World Class project, pose for a photo during a vision declaration ceremony held at the Seoul Dragon City hotel in Yongsan District, central Seoul, on Friday. [PARK SANG-MOON]

The plan was introduced during a ceremony celebrating the start of the government’s second World Class project, which is a project that aims to fund SME research and development (R&D) projects, as well as support them entering the global markets, held in Seoul Dragon City hotel, Yongsan District, central Seoul, on Friday.

The government said it plans to select about 200 SMEs by 2030 and invest some 913.5 billion won in their growth.

A total of 19 companies that have already been selected for the World Class project were introduced during the ceremony, including chemical manufacturing company Miwon Commercial, pharmaceutical company Shin Poong Pharmaceutical and Commax, an ICT company based in Seongnam, Gyeonggi.

Oh Suk-song, chairman of Korea World Class Enterprise Organization, who is also CEO of Meta Biomed, revealed three visions for the project. He said the participant companies will be able to "create more jobs and lead exports," can be "at the center of innovation," and "practice Environmental, Social and Governance (ESG) initiatives."

During the ceremony, the ministry signed a memorandum of understanding with 20 companies in various fields, including the Korea Trade-Investment Promotion Agency, Hana Bank and Federation of Middle Market Enterprises of Korea, which vowed to offer support for the project. The support includes consultations about exports and management.

The first World Class project, which ran from 2011 to 2020, was successful, the ministry said. It spent some 1.2 trillion won supporting a total of 284 companies including parts maker Amotech, software developer Midas IT and cosmetics company Cosmax. Of them, 165 were listed companies and their market cap jumped 81.9 percent during the 10 years of the project, according to the ministry.

Of 176 SMEs when they were selected, 64 grew to middle market enterprises during the project.

“What Korean companies need most at the time are clear visions for the future and main drivers for changes,” Park Jin-kyu, vice minister of Ministry of Trade, Industry and Energy, said during the ceremony. “The government promises to fully support the companies so that the three visions we introduced today can be a cornerstone."