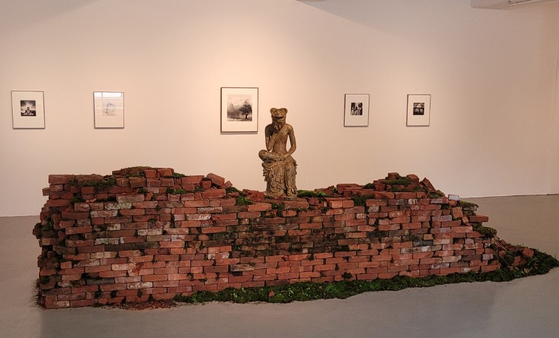 The view of the exhibition ″Reflections″ at K.O.N.G. Gallery in central Seoul. [MOON SO-YOUNG]


For those wanting to celebrate Buddha’s Birthday, which falls on Wednesday, in a calm and meditative way, visiting K.O.N.G. Gallery in central Seoul is the perfect choice.

Kenna’s small, square black-and-white photos of Buddha statues and Buddhist temples, which he has taken in Korea, Japan, China and Southeast Asian countries over more than 30 years, are hanging on the walls.

Saying that he is not an expert in Buddhist iconography and the subjects are his personal selection, Kenna wrote, “Beauty is in the mind of any individual beholder. Feelings of serenity, calm, protection, acceptance, kindness, respects, reverence and curiosity may be evoked.” He is best known to Koreans for his “Pine Trees” series which he took in Wolcheon Village, Gangwon.

And on the floor are Kim’s installation works including “Sadness,” which is the artist’s re-creation of the famous Pensive Bodhisattva. While the original statue from the sixth or seventh-century has a delicate smile, Kim’s Bodhisattva on a collapsed brick structure is expressing sorrow. However, the green moss on the bricks suggests healing and a tinge of hope.

The exhibition runs through Sunday.